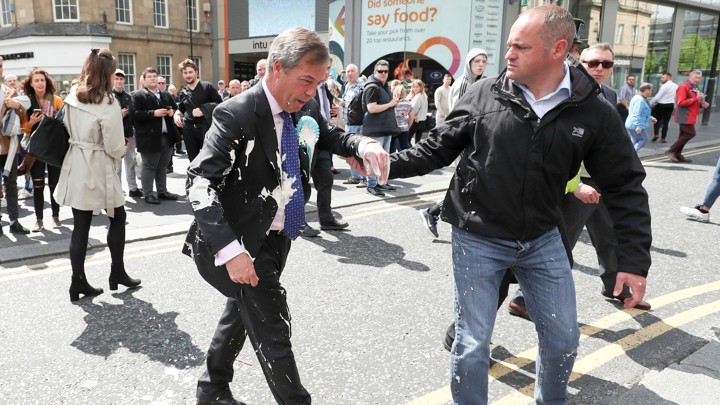 Turdingham, ENG—In a much desired break from the recent rash of milkshake attacks plaguing malty-old-England, Scotland Yard is seeking any information regarding the whereabouts of a large pigeon. The bloated bird is believed to have assaulted Brexit-great Nigel Farage last week with what many are calling an avian Moloturd cocktail. The pigeon, a known proponent of the UK’s remaining in the EU, normally frequents Trafalgar square, Big Ben’s ledge, or that statue of Queen Elizabeth that looks like she’s wearing a toilet seat around her head. On the day in question, however, this pigeon acted like a pigeon …um, possessed by a much nastier pigeon.

The feathery assassin descended on an unsuspecting Farage as he was exiting a campaign rally in Newcastle on May 20th. Eyewitnesses all agree that a single bird should not have been capable of such widespread turdular carnage. One witness said, “I couldn’t shit twice my body mass, even after bad curry. It seemed rather quantum or something.”

One completely mental witness heard the bird yelling, “Here’s your early turd special, Farage! Hope you choke on it!”

Friends of the pigeon claim the stunt was inspired by a Mel Brooks movie, but oddly not the one with the relevant Hitchcock parody, but the other one with the farting cowboys. No additional information is available at this time, as you have to order the discs on Netflix and we’re on a bit of a budget.

[Jonathan Livingshit Seagull and Ladyturd Johnson joke removed by the editor with a damp rag and some Windex.]