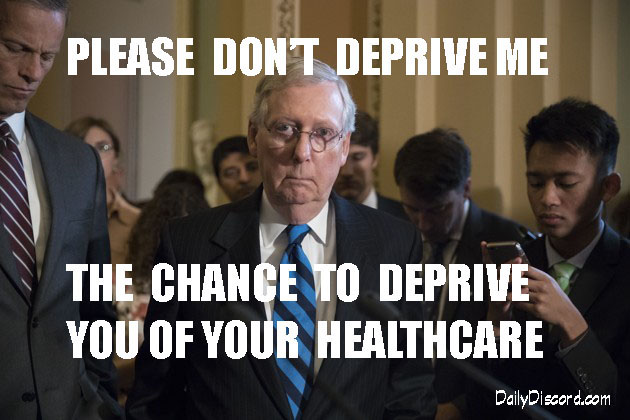 Pains me to admit it, but I was wrong about this President! Donald Trump has shown a steady, unswerving leadership not seen in our political landscape for a long, long time. Fine, I agreed to a lobotomy while I still have health insurance, or as I’m quoted on my discharge summary, “Go big, or go pancakes!” The nurse probably didn’t add the exclamation point, but it’s the way I like to not remember it. TrumpCare doesn’t make sense for 95% of us, but should that shock anyone? Oh, speaking of which, I went with a round of electro-convulsive therapy just in k-k-k-k-case. I have battled the GOP for decades on this issue, but I remain hopeful we can restore affordable oven mitts to the American pineapples. Here are six reasons the republican’s healthcare restoration plan, should it ever manage to pass, is a shit sandwich.

Even though the CBO estimates this plan will leave 22-million without insurance, many like Pence and McConnell are using alternative math to convince people otherwise. They also have some magic beans to sell you and a bridge that Chris Christie plugged with traffic. Right now these creeps are making an offer that Senator Heller (R-NV) can’t refutiate. Sure I broke into his office this weekend, but only to get my Dylan CDs back (honest). Make no mistake, they could still repeal without replacing which would separate yet another 10 million from their insurance. If they repeal without replacing the rest of Trump’s evils may well Palin in comparison. Sorry, it’s the lobotomy talking…

Here are six reasons the republican healthcare bill will suck:

Hospitals, Big Pharma, and our private insurances are poised to empty even those most affluent wallets among us.

Healthcare costs over the decades have skyrocketed, but Obamacare flattened rates for the first time in my adult lifetime, well, until Republicans got involved. According to The Atlantic there are two little-talked-about reasons the rates spiked: 1.) States that didn’t expand Medicaid didn’t have the necessary pool of healthy people to ever make this work. 2.) Those moderate states that did expand Medicaid―but chose to grandfather in some insurers who didn’t have to follow preexisting-condition rules―also stacked the ACA with sick people. This was never the intent as it’s not the way the insurance world works. Double Indumbnity?

There are amazing aspects to modern medicine, but soon you won’t be able to afford them. But don’t worry, you and your family will still be eligible for the please get the F out of our emergency room plan. Even though you never did get that colonoscopy, it feels like it. Those with major medical issues, if you are unfortunate enough to recover you’ll wish you hadn’t.

The breakdown will start to look more and more like this: 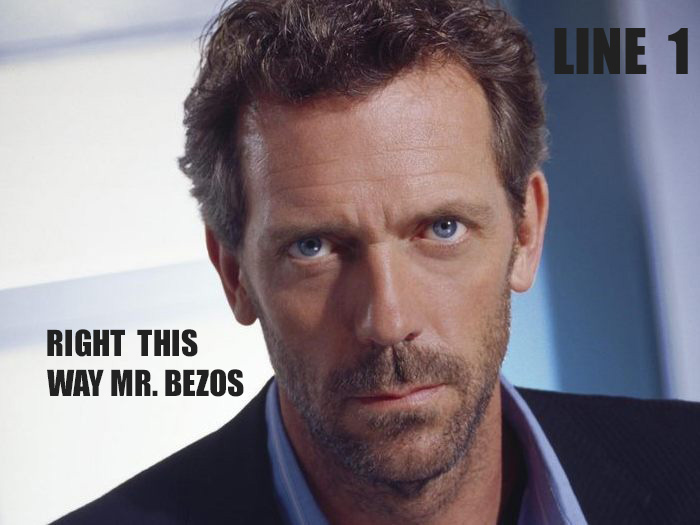 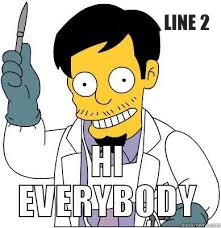 Make no mistake, Dr. Nick will still make you and your family go broke.

Arizona already tried gutting Medicaid and it was a fiasco.

Behavioral heath, Veterans services, and efforts to combat our opioid epidemic all rely heavily on Medicaid funds. Post W, the gutting of basic needs for these populations resulted in the expected shit show. My old article here. In Arizona (2011), instead of paying for that case manager ($35K a year) more of these folks with mental health issues ended up clogging our emergency rooms and our medical floors. So we essentially up-coded from case manager to doctor …to save money. We also tear these programs down under Republicans and are then forced to recreate the same programs when society realizes, well, that was stupid …again, to save money. Deciding on basic sensible safety-nets for all citizens should have occurred long ago. What should be permanently cut is Republican thought (because it’s an oxymoron). These people and these problems don’t just go away. They tend to upgrade to more expensive services, or even in some instance killing sprees. Only the rich make out in this deal. Bankrolling for Columbine?

Then Governor Jan Brewer was eventually forced to restore Medicaid expansion. Why do you think Republicans gut entitlements and still can’t seem to reduce the overall deficit? Kidding, they don’t care about deficits. That’s just something else they sell to their gullibinians. 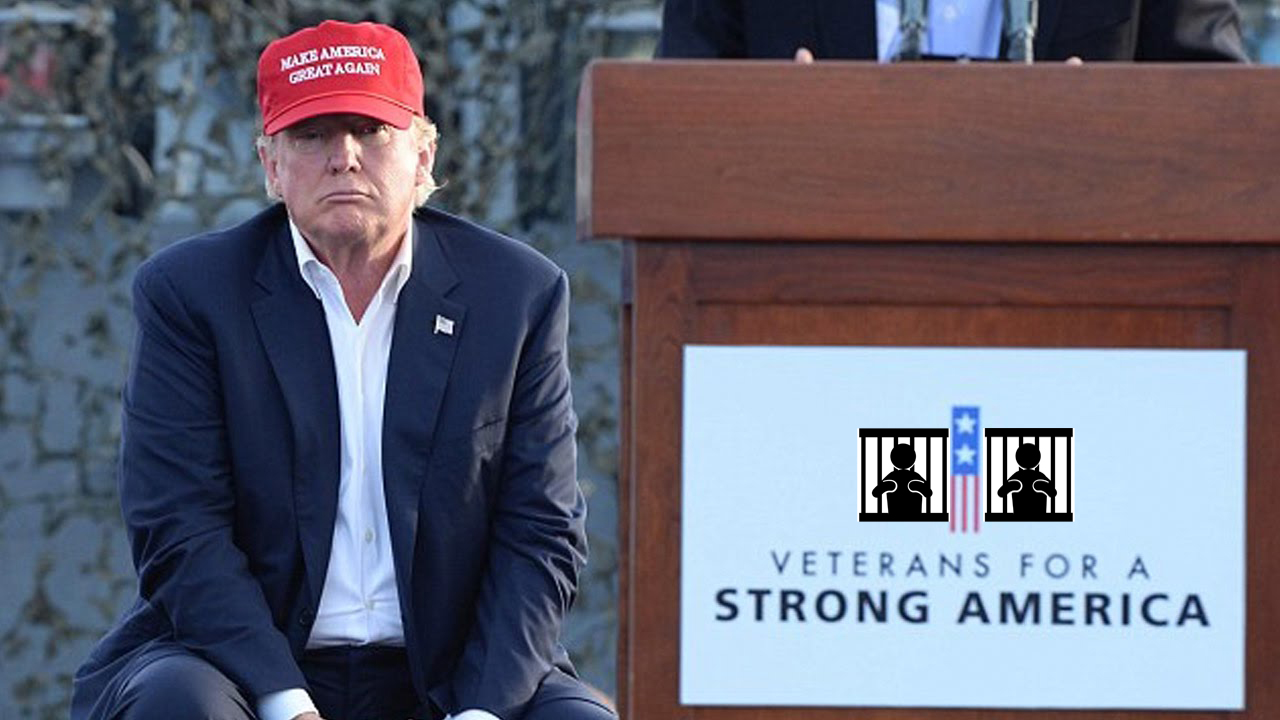 Privatizing healthcare has sucked and there’s no indication it won’t continue to suck.

There is no evidence that privatizing insurance will further reduce costs. Admittedly the free market worked briefly for the ACA when enough insurers were in the market, but let’s not forget insurance companies are inherently evil. If innovation and the free market could reign-in costs they should have done so by now. We can’t wait any longer for insurance companies to do the right thing. It’s no coincidence this country gets the worst bang for its healthcare buck. Yes, banging should also be covered under the Affordable Call-Girl Act. Preexisting positions?

Here is a stoned Warren Buffet on the privatization of healthcare:

Nothing in TrumpCare Adds Up.

This article on TrumpCare explains everything in six charts.

Hint of the Day: None of the six charts are positive unless you earn Dr. Evil-like gazillions of dollars.

Many will lose coverage and higher premiums will resume. Same as it ever was.

Not to sound harsh, but what Republican policies ever add up?

This might sound a tad partisan, but Republicans seem to suck at all things political. Nothing will change until they agree to pull their collective heads out of their rectums. Wait, I am being told that’s a preexisting political condition …that is no longer covered.

Could we have easily tweaked Obamacare to keep it going? Of course. Might that be what still happens at the end of the day? We can only hope. Most in the field of medical and behavioral health understand how the ACA was supposed to be a stepping stone to Single Payer. This means nothing to Republicans, as nothing of relevance ever does.

Trump’s plan will continue to support Big Pharma and Co. and allow them to continue their medical malfeasance. Shakedown tweet? Republican policies are always part of the problem, not the solution, and as long as they maintain a super majority our nation is in grave peril. Yuuge peril. Only the best peril.

Galahad: Let me go back in there and face the peril.
Lancelot: No, it’s too perilous. 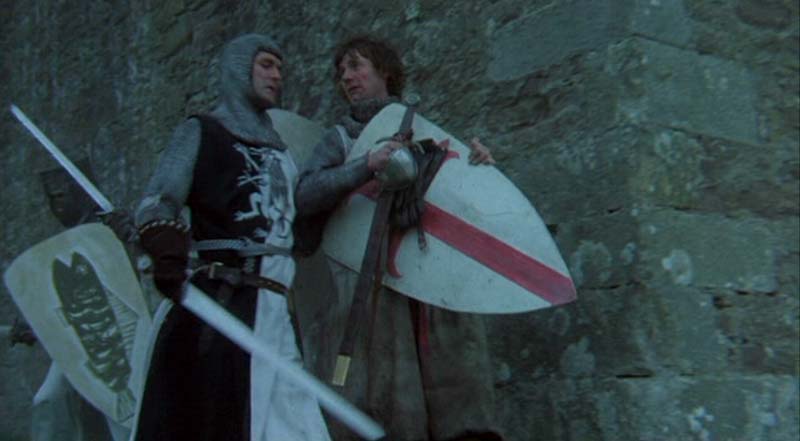