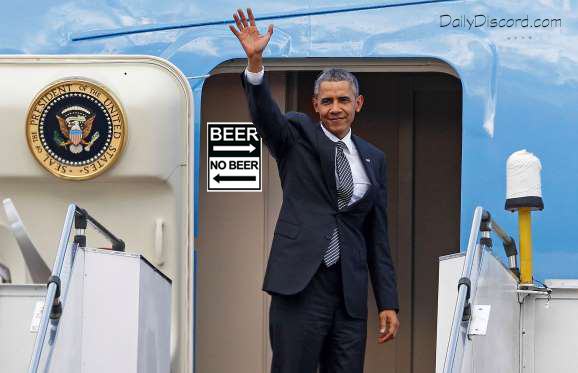 The cries for Obama to resign for his foreign policy impotence grows deafening. At last week’s G-20 Summit, the Prez expressed his overarching strategy to combat terrorism, albeit unenthusiastically. I share his Low-T response. But why the militaristic sad face? …well, Reagan’s efforts to quell the Soviet Union helped create al-Qaeda and Bush’s efforts in Iraq helped create ISIS. Oh, and no one living in the Middle East really understands the borders we created for them and, worse still, republicans don’t either. Despite these facts, Fox and friends are chomping at the bit to create the next more powerful incarnation of evil. They also insist we accomplish this dubious goal with our own bombs, our own lives and our own treasure. Winning! Sorry, but Democrats will never frame this conflict as a holy war, not because they can’t grasp current events, they simply refuse to be tools for ISIS. Speaking of tools…

“If we don’t get more vets injured in battle, the lines at Walter Reed are risk of becoming reasonable. Not on my watch!”

If you do want to stir up a crusade I suggest you start practicing your Farsi and brush up on Sharia Law. We’re having a hard enough time dealing with 5-7% of the Muslim world radicalized. If you insist that we—through the magic of something called stupidity—shift that number closer to 15% or 20%, then I will see you during the daily ablutions toward Mecca! I don’t care if you don’t understand this point, I care whether or not your nomination for president does. (Hint of the day: Nope).

Putin initially targeted the anti-Assad groups that we were supporting, but, let’s face it, we were never really that attached to these moderate rebels, right? Sure it would have been nice to see them rule over Damascus and then blossom into an evil oppressive force in the region, but oh well. Che Syria? Obla Di Obla Daesh? Putin is not as hindered by as many of those pesky international laws, so his military may appear effective at first, but so will his ability to aid radical recruitment efforts. Generally, I’m fine with radicals blowing up, especially with someone else’s bombs. I’m funny that way. Whereas Dems balance their actions with the ideology powering this movement, Republicans seem content to forever foster it. Now I don’t want to imply that all republicans are idiots, but…uh, I have no idea where I was going with this sentence. Let’s move along…there’s nothing to bomb here.

Meanwhile, the moderate Syrian forces the U.S. supported have already been subsumed into Daesh or al-Qaeda, therefore we are stuck with Assad. I remain in support of supplying and arming certain Kurdish groups only. At least they tend to fight radicals without racking up the bar tab too high. You think Obama is dragging his feet? …a President Zano would be moving at snail-on-Quaaludes speed (SOQ). I don’t want to arm Sunni or Shiite, which admittedly makes it more difficult to avoid U.S. troops on the ground. Why hasn’t anyone supported my robot army proposal or backed my stock options in Skynet? I don’t want to arm any of these assholes, but only because these experiments have always gone horribly array (see: the NRA). Speaking of horribly array, no more pictures from the staff Halloween party! 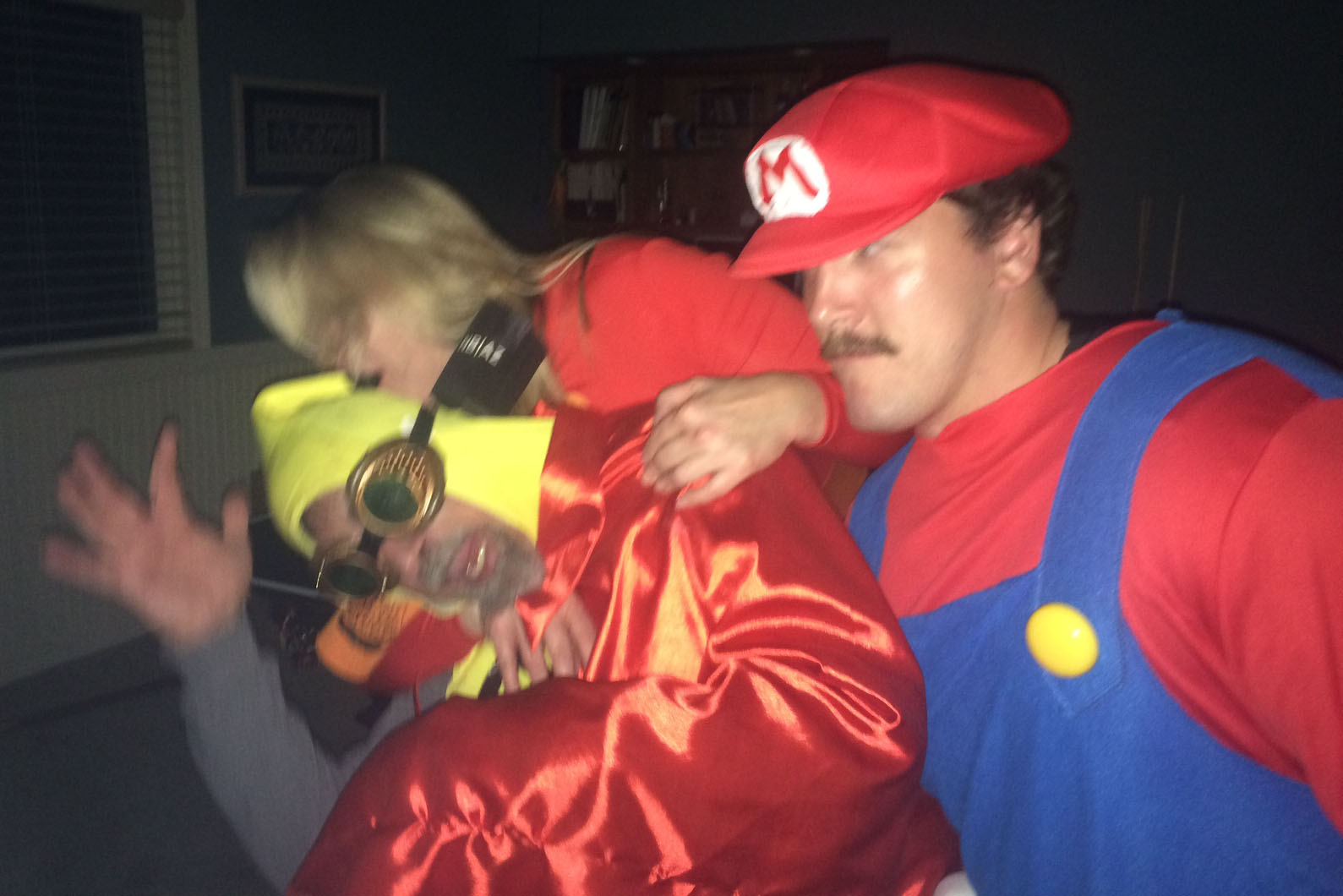 Damn you, Winslow! Who took these?!

Any group in this region who aligns with American interests today, tends to shift toward the extreme tomorrow. It’s like being, well, at the aforementioned staff Halloween party. Now the most moderate groups (the Kurds with Turkish decent) can’t even get along with Turkey! No one gets along with anyone in this shit-show of a sub-continent. Can’t even be a proper continent, can they? Even plate tectonic forces started working against these assholes, long ago. Kidding, your God gave them most of the oil because she hates you. I do have one suggestion: whoever the McCain-o-Grahams of the world want to bomb, we arm. Odds of a better outcome improves drastically whenever one reverses a given republican strategy. Works every topic, every time, like Clockwork…Orange.

Hillary is sadly more hawkish. She doesn’t want a land war either, but she is now vying for a second Sunni Awakening. Aren’t we all? Uh, no…the only viable solutions in the Middle East won’t resonate with our special friends on the right. Minus the no-boots-on-the-ground thing, Hillary’s strategies smell too republican for my taste. She does understand the bigger picture, namely Sunni’s will continue to go ape shit until they are no longer completely disfranchised (See: Iraqi Parliament). I tend to agree with General Petreaus’s view…start banging younger women. No, the other view, wherein he predicts Shiite radical groups are the longer term problem. This faction is much more likely to create some Beckian Caliphate-type thingie. This balance of power Shiiteward arrived courtesy of the Iraq War. Wiping out ISIS will further help the emergence of a Shiite supermajority. Everything republicans have done in the region will ultimately hasten this eventuality, but that’s okay because none of them seem to understand the difference between “ass” and “hole in ground”, let alone Sunni and Shiite.

Did I want a Russia, China, India coalition to fight ISIS? Not necessarily, that brings it’s own risks. I have always hoped Obama’s reluctance would force regional powers to clean up their own mess, which was likely his hope as well. Why aren’t Saudis, Jordanians and other regional players helping with the Syrian refugee crisis? They need to grow up or we will all suffer the consequences.

Reader: Uh, are you talking about Iran and the Saudis or Republicans, Mr. Zano?

Reader: If you’re so smart, why has things only gotten worse in the Middle East under Obama?

Zano: If one predicts that if we do A. then B. will happen, and then B. happens, that constitutes an accurate prediction. C.? It’s simple, Republicans don’t know their ABCs. Green Eggs and Hamas?

Obama has always been interested in winning the long game, not making a great headline.  Last week he finally admitted as much. It’s the reverse impetus behind his Operation: Sit-The-F-Down-Until-They-Stand-Up. You’re confusing a sign of weakness with intelligence. That is why the Foxeteers shake their heads every time our President speaks. Republicans are only happy when we are doing ISIS’s bidding at light speed. Jiffy Rube?

Every general who speaks to this crisis says a variation of the same thing: we need more than just a military solution to the broad range of problems in the Middle East, but every conservative you talk to on the street seems to know better. Bush thought Founding Father types would emerge once he removed Saddam. He did this despite the protests of every sociologist and psychologist familiar with the cultural dynamics involved (including me). Calling Obama “dangerous” and “not up to the task” is projection. This is yet another psychological concept they don’t understand, meanwhile, listing the concepts republicans do understand could fit into a Discord headline.

If we move too fast militarily, kill too many civilians and destroy too much infrastructure (aka: France’s first airstrikes), we ultimately help ISIS. Their plan is simple: a terrorist attack on a given country will either scare them off, or the response will be too heavy-handed which will aid recruitment. Impoverished people with no options will choose ISIS more often than not. Bush played right into Bin Laden’s hands, but even his approach is light-years ahead of our de-evolving republican. Yes, they can still get worse and will.

Did we create ISIS? To some degree, yes, but did we do it on purpose? I danno. They are driving around in our vehicles and totting our guns. Are we that stupid, or was this planned? General Wesley Clark admitted the Bushies had a plan to topple 7 middle eastern regiments post 9/11. You know…Benghazi. One of the saddest days for Obama was watching Putin make a better argument to the UN. Sure Bush started this, but did we really have to defend Bush’s actions? We haven’t apologized nearrrrrly enough for his mess. The world doesn’t trust us…and not because of Obama. Coalitions are harder to build post-Bush. I predicted the Coalition of the Coerced would be a problem moving forward. You know we have the polls, right? We know when the world shifted against us. So stop making with the grade school revisionist history. Understand your place in our country’s diminishing role on the world stage.

Sure we can take an area and control it for as long as we are there, but that’s about it. Occupying Northern Africa, Asia minor, and the better of the Middle East is not possible. Don’t you get that? It’s whack-a-mole until we’re broke. You haven’t learned even that yet? In 2015? Is basic military strategy beyond your abilities as well? It’s all you think about yet you still suck at that too. Count me out your Holy War. Ironically your plan is also ISIS’s plan and as dumb as those MFs seem to be, they are far savvier than you. It’s pathetic.

And what is this shit about Obama not doing anything? How many bombing runs and drone strikes qualify as doing something with you nut jobs? Give me a break. I suggested the same approach to combating terrorism pre-Obama, here. Why? Because in the longrun we can’t ignore how our actions impact recruitment. I never doubted our President understands this. No matter how many politicians and generals repeat this, republicans hear some variation of the adults from Charlie Brown: wawuh, wwaa wa wa wuh. It’s funny how history repeats itself. They started to come around through the Rands and Rons of the world, but how quickly they forget. How do you learn next to nothing and then forget what little you learned almost immediately? I would say the GOP is a one trick pony, but that assumes the one trick actually works.