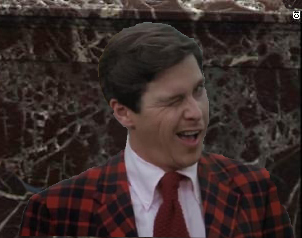 Attorney Otter Lazlo Hutts, Esquire, then turned everyone’s attention to the new Space Force logo: “In the new Star Trek movies, did not Mr. Spock create a separate and distinct timeline wherein Romulus explodes and he gets to bang Uhura? I ask unto you, gentlemen, if this is a new timeline, how can my client be responsible for parallel actions in a parallel Universe? He can’t. No one can. So last Friday never happened, Karen [winks]. And if this is an alternate timeline, which it isn’t, surely the director should be forced to testify? Where is the ghost of Gene Rodenberry? Where is Mr. Spock, the man responsible for the creation of this alternate universe through gross negligence in the first place? By that logic, is Mr. Spock the Whistleblower? Did he kill those men in Benghazi, during Fast & Furious, using Burisma and Crowdstrike for cover? I believe the answer to all of those nonsensical questions is a profound and disturbing, yes. Besides, why waste our time with high crimes and misdemeanors, when these are actually lowbrow felonies? It makes no sense, much like the president’s twitter feed #batshitPOTUS.”

The WH counsel added, “They’re asking you to tear up all of the ballots all across the country on your own initiative, take that decision away from the American people… to pull off the most massive interference in an election in American history, and we can’t allow that to happen. So to make this a fair trial, would we not have to call all of Trump’s accusers to the stand, which is essentially every registered Democrat in the country. Unfortunately, that would take considerably longer than the hydrogen supply of our sun. We need the sun to survive. So are Democrats suggesting mass murder? If we cannot call the relevant voters to testify then we must skip witnesses all together, and save this solar system from the perpetual darkness of liberal genocide.”

Attorney Otter then concluded, “The issue here is not whether the president broke a few rules, or took a few liberties with our female citizenry, because he did. Hat tip Access Hollywood, am I right? But you can’t hold an entire administration responsible for the behavior of a few, sick twisted individuals. For if you do, then shouldn’t we blame the whole political system? And if the whole political system is guilty, then isn’t this an indictment of our educational institutions in general? Oh, and speaking of indictments, I will also be defending our Secretary of Education for her recent defiance of a court order as well. So I direct this point to you, Jerry, isn’t this an indictment of our entire American society? Well, you can do whatever you want to us, but I for one am not going to stand here and listen to you badmouth the United States of ‘Murica!”

*We are becoming like the Swiss, but just not in the way I’d hoped, aka better more affordable healthcare, education, and prosperity. But Trump is exposing all these holes in this cheesy system of hours. Hey, but post Trump we’ll have only one branch of government, which will be easier to drown in a bathtub. The WH counsel can always say, “Hey, I’m not the one on trial here,” so they can really continue to Lazlo this shit. This didn’t work out so well in my personal experience. While I was defending my friend Shag in front of the Deans, it came out—mid-Otter rant—that I too was on trial. Most understand if they’re going to trial ahead of time, so Shag and I are outliers. And eventually outcasts.