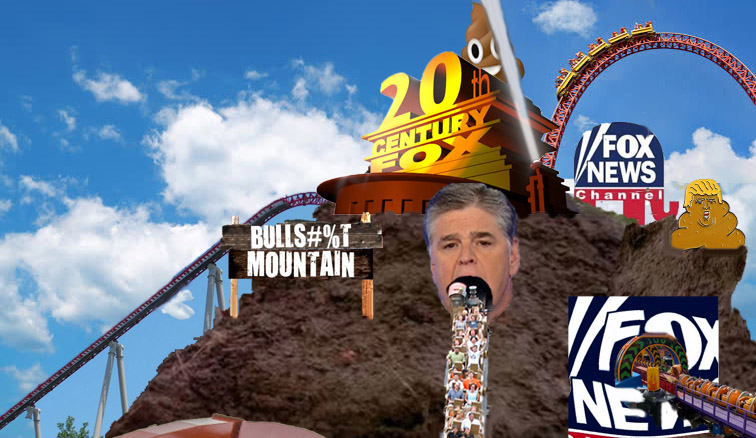 Anaheim, CA—The Walt Disney Company has merged with 20th Century Fox, finally laying to rest the debate as to whether or not Fox News is a Mickey Mouse organization. Yes, Rupert Murdoch, a previous hold out on the deal, is agreeable to join the fun provided he can keep making the ghost of Joseph Goebbles proud of his ‘news’ channel. Disney now owns most cartoons, superheroes, super villains, cartoon superheroes, Jedis, and super-villain Jedis—not to mention, Troy McClure, who you may know from such films as *cough* all of them. If you listen really closely you can hear Universal Studios taking a dump, which hopefully they can work into their own amusement park ride someday soon. Does this represent a giant Disney upgrade? Does a bear shit in the woods? Apparently not if it’s animated, CGI, blue screen, green screen or Chroma key, as all of those FX techniques now come with copyright infringements and steep fines.

Many are concerned the mega-merger between Disney and Fox has already taken a turn for the worse after the announcement of plans to build the roller-coaster: ‘Bullshit Mountain.’ The over 7,000 feet of track takes passengers through a twisted dark reality wherein Fox talking points are repeated loudly and often for everyone’s enjoyment. The park claims that preliminary trials are promising as fights, in the gift-shop-exit, between the target audience and decidedly browner skinned patrons, are up over 600%. Oh, and don’t forget to stop at the refreshment stand on the way out for some Pizzagate and Whitewater.

Other proposed Disney rides with a Fox flare include The Pirates of Benghazi, Jurassic Jesus corral, White Water Supremacy, and an Immigrant Rising skeet shooting competition. Disney does regret to inform its patrons that the opening of Fox’s Inepticot Center is delayed yet again due to ongoing infrastructural concerns.

Disney Fox is also in the planning stages for a merger with galaxy M209143, one that insiders claim, “Won’t end well for galaxy M209143.”

*No, we’re not paying royalties to Jon Stewart. Quitter! And Murdoch hasn’t really joined in …yet.