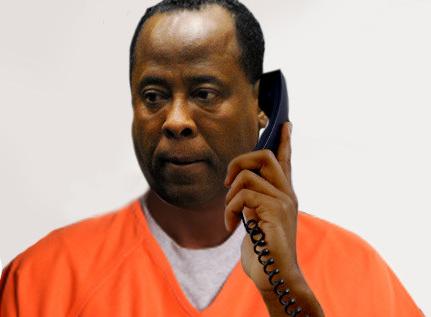 Dr. Conrad Murray is back in the news today after authorities claim the controversial doctor had been prescribing several opioids to Prince shortly before his death. One of the drugs, fentanyl, is even stronger than the opioid that killed his former client, Michael Jackson. Dr. Murray told the Discord today, “First off, call me the guy formerly known as doctor. Get it? Anyway, I didn’t mean any harm. I still had a few pages on my script pad, so I told Prince, ‘As long as it’s not propofol. That shit got me into a lot of trouble last time.’ Oh, and I also warned him against taking this medication and then partying like it’s 1999.”

When reminded how fentanyl is an even stronger opiate than propofol, on par with heroin, Dr. Murray said, “Yeah, but Prince had much more body weight than Michael Jackson, at least a pound or so. In Jackson’s case I told him to take it right before deadtime. Ha! Sorry, I’ve developed a whole routine here in jail. It kills ’em over in C-Block. Kills ’em! All kidding aside, I gave Prince strict orders not to combine any of these medications with large amounts of breathing. In my opinion, he just didn’t listen.”

When asked about any remorse for Prince’s death, Dr. Murray said, “Sorry, I gotta go. I’m meeting with Martin Skreli in the courtyard. We’re going into business together. We’re starting a home detox system with a thousand percent mark up. If it’s after six and you need a fix, call Hurry Murray Pharmaceuticals. We deliver! I’m talking to you, Affluenza teen. You have to pay upfront, though, for obvious reasons.”