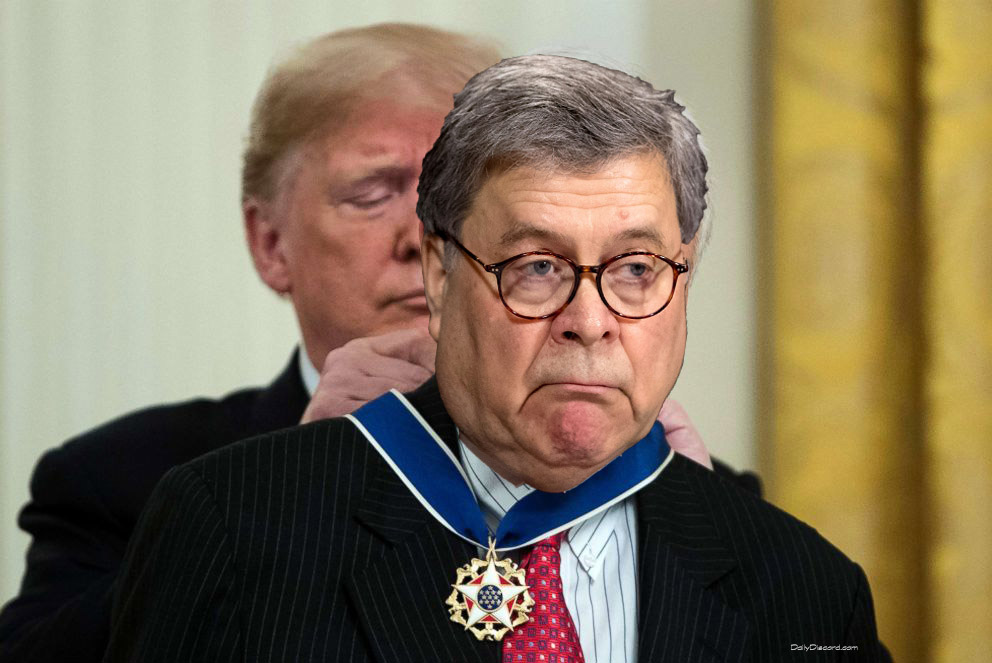 Tweet Tower—In a surprise ceremony, President Trump presented Attorney General William Barr the Medal of Freedom for his uncommon valor in the face of a barrage of unpleasant facts during yesterday’s Senate hearing. The president told the press today, “He’s a great American and if I’m going to be free, he’s going to be free #FreeToo. Next week I’m getting him a Medal of Honor, a Pulitzer, an Oscar, and an Olympic gold medal, maybe for curling because no one will miss one of those. Our new AG is also getting some free coupons to stay at Trump Tower Pyongyang. Ooops, scratch that. And best of all, we use a punch card thing now for all pre-pardons, so like your tenth crime is on us, or, in this case, for us. I punched the whole card! See what you could have gotten, Mr. Refusalcusal?! Play ball next time, Mr. Magoo!!”

Senator Chuck Schumer (D-NY) read the requirements to receive such a medal on the Senate floor this morning (right before it opened): “The Medal of Freedom is awarded only to those who display ‘especially meritorious contribution to the security or national interests of the United States, or world peace.’ How does the Attorney General’s performance yesterday possibly clear that barr. Yeah, I really just broke into the Senate chamber to use that joke, but then I realized it doesn’t really work verbally.”

In a brief acceptance speech the Attorney General both confirmed, yet denied having ever received the award. He then thanked the president, without actually acknowledging any appreciation, before he failed to testify at the planned dinner reception.

Upon Barr’s departure, Trump tweeted, “But, Bill, the hamberders are getting cold! …well, colder!! #McRoomTemp.”