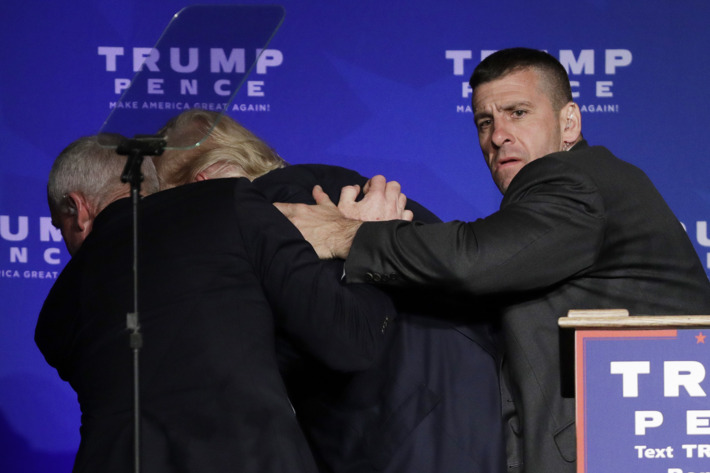 Reno, NV—Donald Trump was ushered off stage Saturday by Secret Service amidst a campaign rally after one of his supporters shouted “Fire Him!” in a crowded theater. Although the incident in Reno proved to be a false alarm, the Secret Service is hailing the event as “good preparation” for the increased challenges and risks associated with keeping a dictatorial moron safe for the next 4 to 8 years. The Secret Service will be conducting more such drills and expanding their repertoire to include nuclear drills, chemical warfare drills, as well as Rosie O’Donnell Sniper-attack Incident Exercises (ROSIEs).

We asked the head of the Secret Service, Bob, what a Trump Administration might mean for his organization. “We plan to be ready for all contingences,” said Bob. “It’s going to be like Olympus Has Fallen, London Has Fallen and ‘I’ve fallen and I can’t get up’ combined. On that note, we’re going to get him one of those Life Alert bracelets too. If we’re all partying hard in the Blue Room, we’ll just let those people handle it. We are also upgrading our nuclear war drills. Now we all crawl under the same grade-school desk for safety. It’s kind of like when a bunch of people climb into VW Bug. If Trump wins, we’re going to have grade-school desks scattered all around the White House, so we can have a safe location for Mr. Trump to tweet the nuclear codes #1234567BOOM!.”

Mr. Trump added, “These guys are the best. I love partying with the Secret Service. Talk about locker room talk! Why do you think I sniffed my way through all three debates? Hah! Doing shots with the Secret Service, now that’s funny. But, hey, seriously, anyone willing to take a bullet for me is worth their weight in gold. No, really, I’m going to do that with tax payer money. I’ll right it off as a business expense.”

The Secret Service has since asked the Daily Discord to avoid publishing the actual U.S. nuclear Twitter hashtag code #1234567BOOM! “We don’t want to change it again,” said Bob. “Changing your Twitter password is a bitch.”