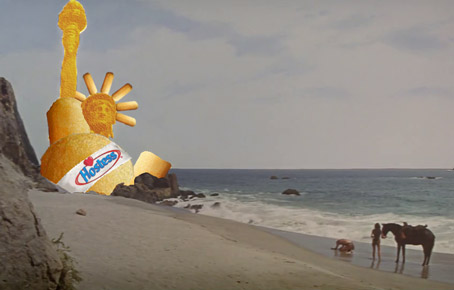 Here’s Pokey’s last article, dissected into tiny segments of wrongness for your enjoyment. And, yes, it will be humorous or my name isn’t Mick Zano …and it isn’t. When conservatives accidentally stumble upon the truth they always seem to claim ownership—not like scholars and gentlemen, more like cats. We can link back to who said what first, Pokey! Didn’t we have you neutered? Try utilizing the search button at the top of the website. Uh oh… I just thought of that scene from the end of Planet of the Apes:

Dr. Zira: What will he find out there, doctor?

(Pokey obviously doesn’t respond to me, because I’m just picking his shit apart.)

Pokey: First off, Mick Zano argues that Democrats are not nearly as moronic, harmful, and sociopathic as Republicans.

Zano: Yes! You have been listening!

Pokey: As an example of this he sites a scenario wherein a high percentage of polled Democrats would allow refuges from a non-existent country to enter the U.S.  He feels this is a less reprehensible position than having a similarly high percentage of polled Republicans favor the bombing of this same fictional country. This example shows the disturbing flaws in the psychological make up of many of both Republicans and Democrats alike. When confronted with perceived threats both sides tend to instinctively react without reflection, but their irrational reactions are different.

Zano: I agree with your last bit, which is why I made this same point time and time again …even while debating you once, here. This is where we agree, which is why I agreed with you. Technically, I’m the one who made this point so maybe you are agreeing with me, just in disagreement form.

Pokey: When Ricky Republican feels threatened he looks to blow up the first thing that moves, while Denny Democrat would rather open up his front door, raise his hands in the air and channel Neville Chamberlain. “Come into my house. Take anything you want, just please don’t hurt me! I’m a pluralist for fuck’s sake!”

Zano: The Agrabaharian Dilemma is still a false equivalency. Liberals function from a place of compassion, not fear. You’re thinking of Republicans. We’re into refugees, but not in a weird kind of way. And I have been critical of Angela Merkel’s open door policy in Germany, but should the U.S. accept more refugees? Yes.

1. Outside of the Middle East, we are the country most responsible for the refugees in the first place.

2. We are accepting the least amount of any civilized society.

How come the Responsibility People never want to take any? I support the best screening and background checks as well. As for the War on Error, where we differ is this: liberals don’t want to create more radicals than we destroy. In fact, I voted for the guy who has ISIS on the run, not the guy who created ISIS through incompetence. 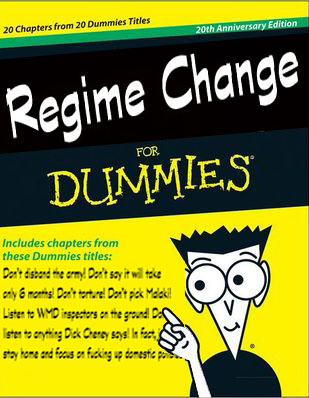 Maybe if W had only had this book (image right).

“When people arrive open-handed at your doorstep, gun them down at the border.”

“Give me your tired, your poor, your huddled masses, so we can watch the boat capsize in the Hudson. Hah!”

Pokey: Zano then goes on to give all kinds of examples of how Democrats are far more savvy than Republicans. He starts with Climate Change, and he tells us how 97% of climate scientists believe that the climate is changing. Of course, Zano implies these 97% of climate scientists believe that human activity is causing the change. Oh, and the Republicans are just to ignorant to deny what is staring right at them, like thermometers.
[Zano: Too ignorant, not to ignorant.]
Pokey: I claim that 97% of all of the statistics that Mick Zano uses are bullshit. Who are these climate scientists? From what I can see, this “97%” figure came from the percentage of papers published in the field that took a “yes” or “no” position on the question of human based climate change. If I recall approximately 30% of the papers took no position whatsoever. So should we conclude that 30% of climate scientists don’t know what causes climate change? What I do know is this figure of 97% is used by politicians NOT scientists.

Zano: Ug. This was my prediction for the Republican climate game-plan from a 5/2014 article:

1. Deny climate change is happening as long as possible.

Remember when Pokey was denying climate change outright? Notice his seamless shift to #2 (which, incidentally, he always steps in). It’s funny how right-wingers eventually concede every point without actually acknowledging their error. I agree, it would probably take too long:

Sorry, Pokey, but 97% of climate scientists do believe in man-made climate change. You should really try to get to number #3, before India and China’s environmental efforts surpass our own. So what is your point? …if 30% of climate scientists have no position then only 67% (over two thirds) think climate change is man-made? If only 10% were predicting mankind’s extinction we should take this seriously, which is 10% more than those Republicans we should take seriously.

Pokey: I claim that 97% of objective political scientists believe that any carbon emissions regulations imposed by the federal government will do jack shit to help the environment.

Zano: I’m sure your grandkids will be proud of your keep-burning-coal, nothing-is-going-to-work-anyway stance. We don’t have time to educate Republicans, talk about a waste of tax payer’s money. I think Hercules would rather wrestle that giant squid again. Wait, I’m being told the last giant squid washed up on a beach in Kauai.

Pokey: Zano then retrieves even more dubious stats showing that “an estimated 24,000 lives were saved by Obamacare.” And healthcare costs were leveled. These “facts” were given to Zano by the same “experts” who said that the average family would save $2,500 from Obamacare. Zano and his “experts” aren’t focusing on how the Administration fell a scant 800 billion dollars short of that promise.

Zano: I always predicted Obamacare would be a mixed bag (3/2009 …yes, 2009!). If I’m right and an estimated 17-million more people have health insurance, but you’re right in that it didn’t save each family the promised 2,500, then it is a mixed bag. Meanwhile, every Republican on earth thought the passing of Obamacare signified the End of ‘Murica.

“As I gaze across the volcanic pools where our cities once stood, I look to the heavens and ask, why couldn’t we find the strength to repeal and replace!”

I think ignoring these “bullshit facts” is how Republicans keep screwing the pooch on every issue.

Pokey: A Zano article would not be complete without reminiscing about George Bush Jr. Oh, how Zano misses the Bush man. You two should get a Blue Room. Zano reminds us of how Bush lied to get us into Iraq, and now the Republicans are making Benghazi into a “false equivalency” of the Iraq atrocity. Barack Obama was elected President largely for his consistent resistance to the “Unconstitutional” war in Iraq. But before Bush sent troops to Iraq, he at least gained congressional approval (something President Obama never did when he attacked Libya).

Zano: I agree, Obama needed to seek congressional authorization to go to war in Libya, which is why I said as much as he was invading it, here.

The nightmare of W will finally fade on inauguration day for your next brain trust.

Pokey: Libya’s destabilization led to Benghazi. Zano has referred to Benghazi hearings as a witch hunt from the beginning, yet it was these hearings that led us to the understanding of Mrs. Clinton’s private email account.

Zano: What! Finding wrongdoing unrelated to the original inquiries of over a dozen hearings about nothing IS the very definition of a witch hunt! Incidentally, it’s also the premise of the hit comedy series Seinfeld.

Pokey: I will say that its a “false equivalency” to compare Donald Trump’s legal issues with those of Hillary Clinton. You see, Donald Trump’s lawsuit is a civil case. Mrs. Clinton is currently under criminal investigation for knowingly setting up a private email account to be used for government related information. After hiring a person to destroy her server, she claimed that the emails were all of a private nature, involving letters to Chelsea and her Yoga teacher. When emails were found that contradicted this claim, Mrs. Clinton said that their were no classified emails sent. When emails were found contradicting this claim, she said that no emails were sent that were marked “classified” at the time they were sent. And Zano remained silent, which is actually the state I prefer him. So I encourage more of this behavior, Mick, and I look forward to your non-response.

Zano: Ha! You’re a very smart dude, Pokey, and yet you think Trump would make a better president than Hillary Clinton? Really? You are implying this. You understand that your ilk hasn’t been very good at the whole prognosticating thing, right?  I don’t think Republicans could see a train coming if Snidely Whiplash tied them to the tracks in front of it. Oh, and here’s me being silent on the issue:

“My reluctance to endorse Clinton involves her email-server issues, which is very different than any other Republican scandal in that there might actually be something to it.”

To sum things up, if you think the Dem missteps match the GOP ones, you suffer from a maladaptive political brain disease known as Foxidation. But you’re not alone. There’s help. Pick up the phone, right now, and dial 1(800) FACTS-ME.
Hillary does have a lot of baggage, but I prefer to criticize her about real stuff. Her record is better than anyone’s, especially when you consider she’s been under intense public scrutiny since the Garfield Administration. I don’t think she’ll be indicted but only because Republicans are never right about anything. I have been setting my watch to their wrongness for a long, long time (shhh. That’s a bit of a trade secret). After all, the first 27 Hillary scandals from Whitewater to Benghazi to the assassination of Vince Foster went nowhere. Hey, maybe she should have starred in American Sniper? Why not just embrace her inherent evilness, Pokey? Come on, you can do it! On day one of the Hillary Administration let’s hit Second Chance for a fluffy white villain cat and then help her install that shark tank directly under the Oval Office.
Look Pokey, I never said the Dems were perfect. I might even agree that too many liberals are uninformed, entitled, millennial-turds (UEMTs), but they are walking baby Einsteins comparatively. Dems are not always right, but the story remains how Republicans are almost always wrong. It’s uncanny. This old Venn diagram explains everything: 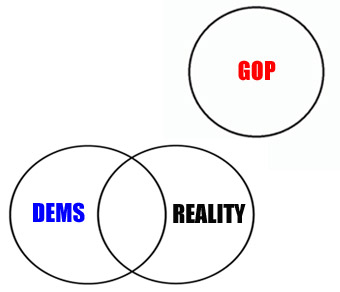