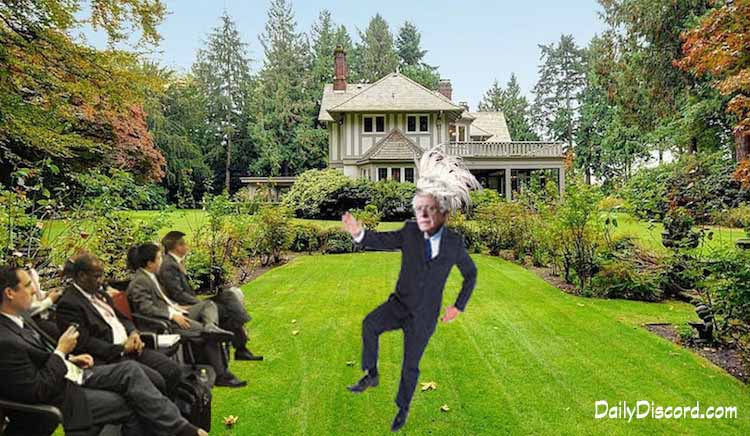 Burlington, VT—In an attempt to woo democratic superdelgates towards his cause, Senator Bernie Sanders enacted a little understood and rarely seen political courting ritual. The event took place earlier today at an undisclosed location outside of Burlington, Vermont. To keep with his message, Senator Sanders charged 27 dollars a plate and his wife made most of the food from scratch.  Although the impact of this event remains unknown, critics were quick to call the performance “an act of desperation”, “beneath the dignity of his office,” and “clearly PhotoShopped by imbecils.”
Senator Sanders has maintained for some time that winning the nomination on pledged-delegates alone represents an uphill battle. His decision to stay in the race is based on whether or not he can convince the superdelegates to switch their allegiance. He told reporters today, “I believe this attempt will sway many of the party elite to switch to Team Bernie. And another thing, there’s still lots of hamburgers and hot dogs leftover, so help yourselves. I have made the decision to throw out the potato salad, because it’s mayonnaise-based and has probably been outside too long in the sun. (Indecipherable gesticulations.) The coleslaw is fine as I believe it is vinegar-based. I am not going to send the leftovers to the nearest homeless shelter. No. That is precisely what Hillary Clinton would do in this situation. I am going to split it evenly between all of the homeless shelters in the greater Burlington area and I might just eat the potato salad myself, right now. Any longer and …well, whereas I can guarantee you all today that I will make it all the way to the convention, the same cannot be said for the potato salad.”
The Clinton campaign has pivoted its focus toward the general election and is denying allegations that she currently preparing her own pantsuit pantomime routine to counter Sander’s efforts.