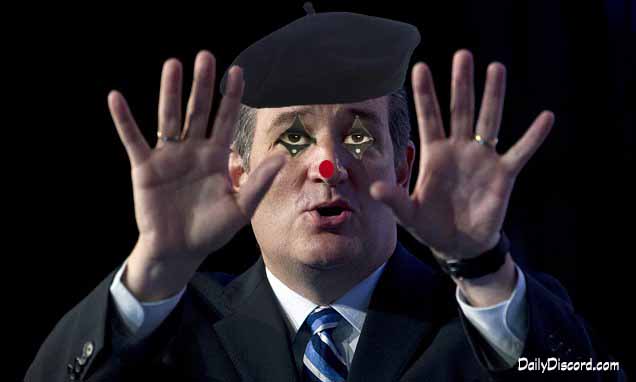 Nashua, NH—Just days before the New Hampshire Primaries, Senator Ted Cruz strayed from the usual stump speech and broke into a dazzling mime act. He thrilled scores of Republican primary voters with his performance of: “Invisible border wall, built by Mexicans.” He then swung into a rousing rendition of: “Man trapped under crushing federal deficits.” Cruz then took a break from the action, which consisted of drinking from a cup of imaginary water, before resuming with: “Man walking against wind of Islamic extremism” and “Shrinking government and then drowning it in bathtub.” Then for his grand finale he performed a masterful: “Man climbing out from under overwhelming government regulation.”
Today both sides of the aisle are showering Senator Cruz with praise for his efforts and his flawless execution. He received accolades and positive reviews from The New York Times, The Washington Post and some are already calling him a shoe-in for Mime Magazine’s Mime of the Year.
Senator Cruz never uttered a word during his performance, which many are calling “a refreshing change.” He never broke character, yet he conveyed many of today’s fears about an uncertain future. Only after his gutsy performance did Senator Cruz talk to reporters. “I know what scares Republicans and I really wanted to scare the living shit out of an entirely different audience today.” When asked about the inspiration behind such an unprecedented move, Cruz said, “I have always been a mime at heart, and I wanted to recapture what happened to Marco Rubio last night. He turned into a short-circuiting robot right in front of the nation. Everyone is still talking about it, so I asked myself how can I capture some of that magic, but in a good way?”
Marco Rubio was quick to respond to Senator Cruz’s statement, “Barack Obama is the first president, at least in my lifetime, that wants to change the country. Not fix it, not fix its problems…not fix its problems…not fix its problems…not fix its problems. Rebooting. Please do not turn off candidate until update is complete.”