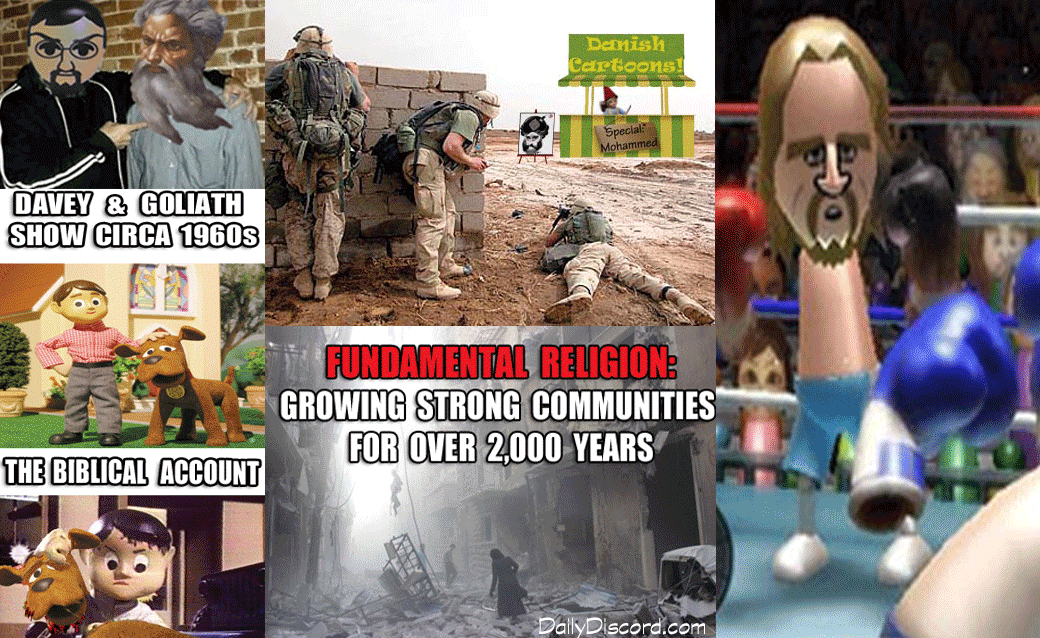 Over the years I have been hard on all forms of fundamentalism, regardless of the particular brand. So, Mr. McDooris, I see your “the Qur’an was revealed to Muhammad” myth and raise you a “burning Bush” one (which, incidentally, should have happened due to his war crimes). Whereas I expect more from our own, you expect less and less. I guess that’s one way to never be disappointed. Blessed are the oblique? Your reasons for Trump’s ascendance are absurd. You have failed to acknowledge the fact your party is a clown car. Can’t we at least agree on that? Oh, but I did enjoy the length of your last submission. Being wrong, yet concise is a rare gift.

Let’s start off with something I really did actually appreciate about your last post (full McDooris feature, here).

“I don’t believe for a second that Muslims should be banned from coming into this country, but I do believe no one should be allowed to enter this country unless they can prove their respect, understanding, and loyalty to our Constitution.”

This is a brilliant way to both shift away from a religious litmus test, yet help ensure those entering our country share our ideals and will not try to usurp our values. Of course, I find the rest of your article a steaming pile of propaganda. Whereas you are always blaming liberals and atheists for tearing apart the fabric of society, I think we can all stand some improvement, from the devout to the agnostic. I have always liked the idea of threading that needle between science and spirituality. Whereas conservative-types blame the liberal professors, liberal professors blame the preachers, etc.

“Is the conscientious teacher to be loyal first to the supporting myths of our civilization or to the ‘factualized’ truths of his science? Are the two, at every level, at odds? Or is there not some point of wisdom beyond the conflicts of illusion and truth by which lives can be put (society) back together again?”

While materialism is taking a pounding in some arenas, there’s mounting evidence of the validity of at least some of the myths from our remote past. I think if you throw some Jungian archetypes into this stew, and maybe a little psilocybin, something important may yet emerge from this Gothamesque wasteland. Look a unicorn!

What you fail to realize, Pokey, is how this impetus to move toward reason occurs in every society. Unfortunately at some point we end up throwing out the “spiritual baby with the bath water”:

“The cure for the disaster of modernity is to address the dissociation, not attempt to erase the differentiation!”
― Ken Wilber

No party in recent history is quite as dissociated as today’s GOP. They can’t even identify the majority of the problems of our time, let alone solve them. Meanwhile, a literal interpretation of any origin myths is often at the root of our problems. Even Islam had its golden age—a period fraught with science, religion and reason. Who knew? These important mystics were known as Sufists. Fundamentalists snuffed that shit out and we are still seeing the results as Muslims blow themselves apart in cafes—many simply for the promise of some afterlife nookie. It’s pathetic. Yet Sufism remains proof that something wonderful can come from such humble fundamental roots. And, it can happen again, if we are able to drown out the zealots on both sides of the pond. Fundamentalism proves to be a trap for many, where reason no longer has a place. Consider this point as you try to convert the heathens.

Back to your last post. Here’s the two reasons you attributed to Trump’s raging popularity:

1.) He knows how to exploit his celebrity status. No argument.

2.) People are fed up with this suffocating atmosphere of political correctness. Uh….okay

So you’re blaming liberal PC as the main reason for Trumps’ rise? Really? First and foremost this political aberration is a direct result of the ongoing collapse of the Republican party. You kind of left that part out. They’re lost. They seem oblivious to how we arrive at any given situation. Driving Miss Crazy? Republicans never acknowledge the long line of political atrocities they tend to create with metamucil-levels of regularity. Even when the results of their policies are undeniable, they never admit any wrongdoing. That’s because they’re already too busy screwing the next political pooch. I call this phenomenon Zen-wrongness.

I predicted Trump would prove unstoppable for far too long, here. I also predicted how the Republican primary system would start creating more extreme, yet less intelligible candidates. On the left side, Bernie may be a bit extreme, but he’s still brilliant. If you think the Republican field is diverse and strong, you might want to enlist the aid of Dr. Ben Carson, because you have lost your friggin’ mind.

My life is much more likely to be impacted by Republican ignorance than Islamic extremism. More people have been shot in Chicago in the time it took me to write this rebuttal than all the folks killed in the homeland by terrorism since 9/11. Slight Exaggeration Alert, but you get the idea. Is Islamic extremism a problem? Yes. Will Republicans likely make it worse? Yes (See history, or when that fails check Mickipedia).

Listen to yourself, Pokey. Obama has ordered over 10,000 air strikes on ISIS positions. What would better convince you of his seriousness? 11,000? …because our air raids go to 11K? How many more ISIS leaders does he need to pick off so you feel he’s Reagan enough? Dronetime For Bonzo? Your ilk somehow feels much more at ease with someone who remains steadfast in his convictions, prays to God, and then promptly invades the wrong country.

I’m not trying to minimize the problem of Islamic terrorism, because they may yet get their hands on a dirty bomb. But, again, only the Dems seem interested in tracking and reducing all fissile material across the planet. Cheney was just confronted on how Iran improved their nuclear capabilities tenfold on his watch. He dismissed this fact.  You can extrapolate that further, as Republicans dismiss all facts.

Deception is reality. The Fact Checkers are all university professors… Science is a liberal ploy… Math? Where we’re going we don’t need math.

The GOP remains a distraction, but for what purpose? Post 9/11 Republicans took the exact opposite stance we should have …and it shows. You still don’t understand how Obama wants to defeat this ideology, because your views are nearly as rigid as our enemy’s. You also still blame Obama for the gross expansion of executive power, which is an interesting take. Sure he deserves some blame for expanding the NSA, but what law can you cite that’s his baby? You can’t, because all such expansions are Cheney-related. Tortured logic?

Do you recall our heated argument in Ye Old College Diner nearly 15 years ago? Here’s a related Zano quote:

“As staunch Constitutionalists, they never realize how, post 9/11, they paved the way for NSA wire tapping, secret bases, secret police, and the permanent suspension of habeas corpus. Or, how their own assaults on the Constitution were so egregious it led to Jose Padilla being pulled off the streets of Brooklyn. He was detained without a warrant before he was tortured into permanent mental illness, just the way our Founding Fathers envisioned.”

I also predicted Obama would not roll back the Patriot Act, but I also understood his rational as anyone in his position would be forced into the same neo-corner. On the flip side, I never understand why Republicans do what they do. Clear and present blunder? They have the collective insight of a cow chip.

2 comments for “Let’s Start With Something I Appreciated About Your Last Post, Pokey: The Length”