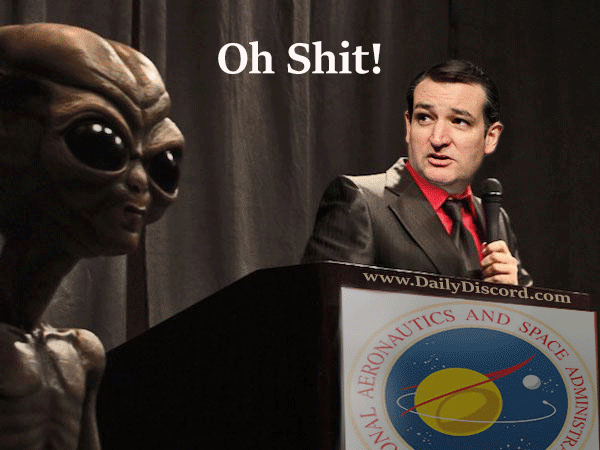 Washington, DC—After chugging a warm pitcher of Pabst, Buzz Aldrin burped the national anthem and Senator Ted Cruz took the podium at the 3rd annual NASA bake-sale. “Since 2009 there continues to be a disproportionate increase in NASA’s funding for the earth sciences,” said Cruz. “This makes no sense as Earth is the opposite of space. Duh. And do you have any idea how much tax payer money is wasted each year keeping those four little Alpha Centurians alive over in Area 51? Oh, wait, that’s classified. Can you bleep that part out? I don’t want those MIBs on my ass again. They’re worse than socialists.”

Senator Cruz gave such a godawful speech about the agency he now oversees, even an extraterrestrial lost his shit. His shit, as it turns, is highly corrosive and burns through floors. In the middle of Cruz’s speech an audience member suddenly turned off its cloaking device, revealing a greyish-green form with bulging black eyes.

The creature pushed its way to the podium and grabbed the microphone from Cruz. “Gleep, gleep, gleep, gleep! Kidding, I’m here until Friday, folks! Really, that’s when my extraction module returns. Listen, this man is not eligible to be president of the United States. He was not born in Canada—uh, like most presidents—he was born on Regulus. This makes him a very illegal alien alien (VIAA).”

Cruz wrestled the microphone back from the creature, “I call bullshit! Regulus is a star. I’m from a planet orbiting Regulus! Ooops…I really don’t like those MIB MFs so can you please bleep that part out too, Discord?”

“Not you, asshole!” said Cruz.

That is the precise moment when some serious shit went down. The alien feces actually burned through the floor, the basement, and the sub basement of the convention center. One nose-witness described the odor as being  “worse than when Donald Trump opens his mouth.” This bowel movement, which some are calling the ‘shart heard ’round the belt’, cost hundreds of those in attendance their lunch. The incident has also indefinitely suspended service on the Metro brown line until further notice.