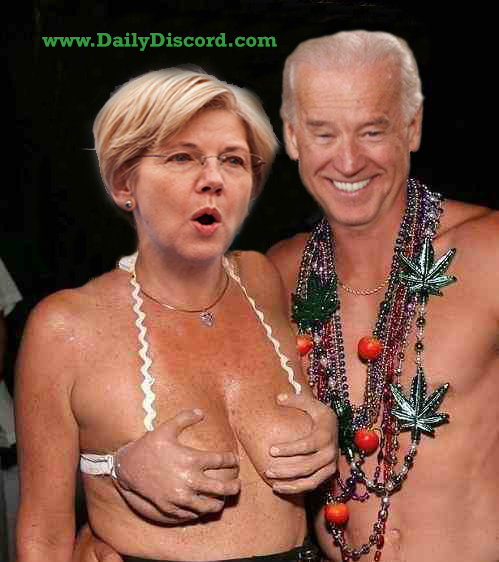 Washington, DC—Elizabeth Warren admitted to the press today that when Vice President Joe Biden asked her to be his running mate, “Shit got a little weird.” Biden is considering Warren as a potential running mate, but he chose to pop the question to her amidst his own raucous Hawaiian-themed nudist pot party.

The released photo, above, has many believing this ticket is already dead on arrival. When Elizabeth Warren was questioned about her fashion faux pa, a hand shaped bra, she said, “Look, I either get a bra with Biden’s hands already fondling me, or I have to contend with the genuine article. I was choosing the lesser of two evils. For the next party I just need to CYA, if you follow.”

Biden responded, “I believe in women’s equality, which is why I hit on every female at my parties equally. You know Lilly Ledbetter? Led-better call me back.”

When asked if he and Senator Warren could really challenge the Clinton Machine, Biden said, “I can not beat Hillary in a conventional primary, and I certainly can’t beat her with my clothes on. This country is becoming more progressive. First gay marriage, then Hawaiian-themed nudist pot parties. This is not unprecedented, after all, I attended Bill Clinton’s Naked Hillbilly Party in ’96. Hell, even Reagan’s Shit Kicker party was a real barn burner. Seriously, we lost a barn that night and a secret service man. Great party, but some people took the theme a bit too literally I’m afraid, P-U!”