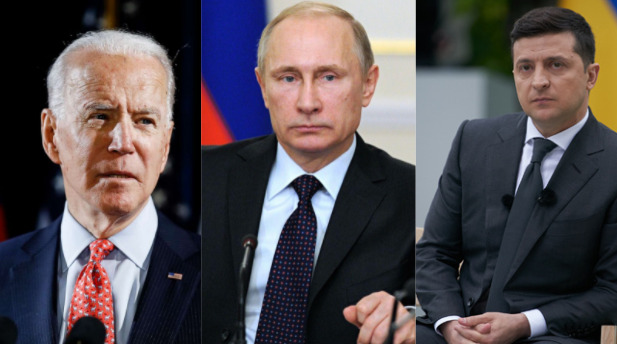 WWIII is shaping up nicely. First, we have the crazy uncle who watches Tucker Carlson, aka our resident sociopathic Russian, who just wants a little bit more room between himself and anything that smells remotely like NATO. He is an ego-driven, soulless type so, depending on how things go down, we can expect big things from him on the war escalation front. Then we have our own president, quick on the supersanctions, but really cast in the role of FDR for this round. He is happy to remain calm and keep up the pressure on Russia, at least financially, but he doesn’t really have the appetite for mutually assured destruction. Finally, we have Zelensky (the key player of key players), who started off strong but is now in a rather tough spot. The right decision to avoid catastrophe on a species-level is to call uncle, or at least uncle neutral. This is a bitter pill for Zelensky to swallow when your friends and family are being bombed back to the stone age by the person you need schmooze. Nevertheless, Operation Tepid Borscht is the only scenario that will halt Putin and it might just be the only thing that can save us. I realize gazpacho is more typically served hot or cold on this side of the pond, but borscht roles that way too. So let’s do this! If I were the US president—and both of my readers realize I should be—I would be brokering that neutral suppe-dealio, right now. And if you elect me, I will stop making borscht jokes from day one!

Here’s the fun part …no relevant intervention or de-escalation is likely to happen, because 3 white dudes + three egos = WWIII. To better understand this phenomenon, just visualize 3 boxes that these 3 men who won’t think outside of these. Then blow up the aforementioned box with a thermonuclear device. Until then, let’s start using the correct titles for this one: Archduke Zelensky does have a nice ring to it.

It’s true. My dystopic prognostication theory was built more on dumb wars, equally inane economic policies, and a failure to address climate, pollution, environment, et al. This rise of populism across the globe and the current ‘shadow of WWIII’ situation was never really a flavor. I predicted Rocky Republican Road and it looks like we’ve ordered some banana atom split. Either way, this is looking grim, so let’s take a page from Aristophanes, eh?

The best thing we can do for the moment is to throw ourselves at the feet of the statue of some god.

If Putin’s own turn on him that would constitute the best outcome, but until then he needs clearly labeled offramps to save face and keep his finger off that red button. Oh, and I promised myself, no more borscht jokes. I thought I had this thing beet.

Addendum 3-28: Had to add a later addendum to this piece. So Biden makes this terrible ad libbed remark that goes against everything I suggested in this article, calling for regiment change in Russia with this gem: “For God’s sake, this man cannot remain in power.” Zelensky, shortly after hearing this, taunts the west for being “cowards” for not acting more decisively. Wow. So we have a full-blown sociopath running Russia and we follow this with some predictable dick swinging from the two ‘sane’ players. Nice. No off ramp, just escalation and stupidity abound. WWIII hangs in the balance, and we’re playing checkers with people who lost their marbles.

But forget all that, libs, how about those Oscars, eh? Ha ha.