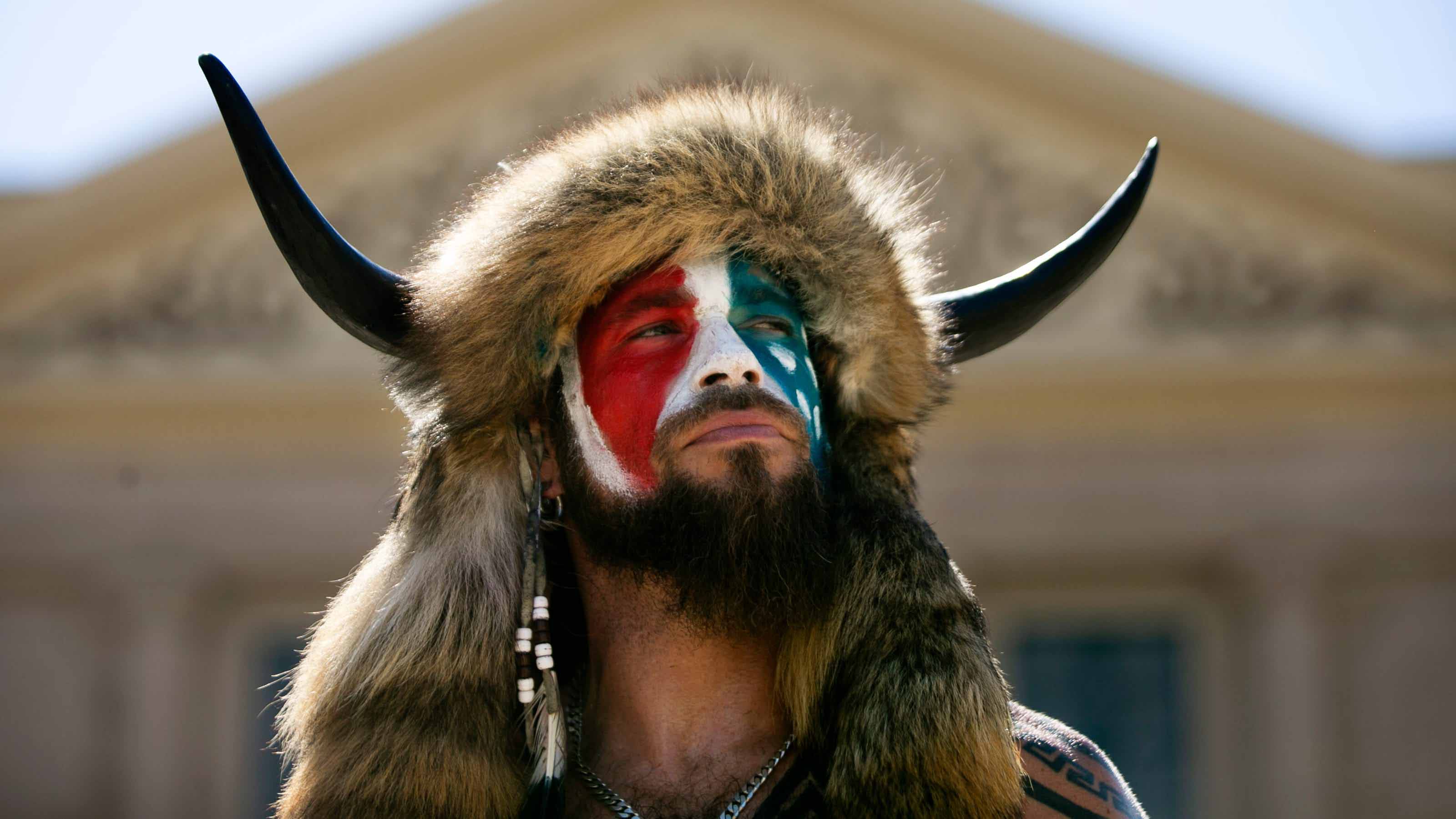 Watching the foundations of our republic’s recent rumblings evoked some mixed emotions for this blogger. My sister was furious with my dimsurrection day aloofness. On 1/6 I was more about grabbing the popcorn and watching the show than any angst over our flailing democracy. Look, when you warn of an encroaching problem for decades there’s a certain detachment when said problem finally manifests, in this case in bison-shaman form. I must admit to being a little jealous of our organically grown, free-range seditionist. When the day comes that I storm the Bastille—for the good guys, of course—I hope I can pull off a costume half as epic. He certainly exudes a certain approachable vibe; he’s a snazzy charismatic character, a natural leader, and he prefers organic food. More than any republican politician, journalist, or even your average MAGA-citizen, I believe I can don my cape & banana suit combo, sit down with this man, and bridge our epic ideological divide. Zanonon will grant you an audience, well, provided you make bail.

And where’s that progressive agenda we ordered?! There’s only one way to get progressivism rammed through and I am concerned about unity Joe throwing the hail mary.

When I started writing this piece a sitting congressman claimed to have voted for Trump’s Stop the Steal rhetoric, not because he believed any of the related conspiracy theories, but out of an existential threat for his family’s safety. And, this congressman is not alone. So how do republicans continually ignore this stuff? And the GOP still defending this dolt, well, more than his defense attorneys at the moment.

Sorry this article is late, I chose to binge-watch Tom Hanks films rather than follow recent events. Shit happens.

Why so glum, Zano? You handpicked this ticket and now it’s backed by a supermajority?

First off, even if Trump’s last-lawyer-standing is Hunter’s Laslow, this impeachment trial Part Deux is already DOA. And, a QAnon congresswoman (R-GA) believes a secret Jewish space laser is responsible for the CA fires. Speaking of Q-Dropping, this one wins the week: Trump is speaking to QAnon loyalists via Morse code. Get on that shit, Poke! Oh, I’m sorry … . -.. .. – .. — -. Does that help? Maybe if I send you enough dots you can start connecting them.

And despite a semi-super majority, Biden will be plagued with the looming Trump economic correction, staggering unemployment levels, as well as a wave of domestic unrest not seen since Lincoln. Yes, my Town Car died sometime during the Reagan Administration. What did you think I meant? The CBO and those people ‘in the know’ that I know say the economy will turn around in 2021. I am not buying it, but, if that happens I will concede that I got part of my Trump prediction wrong. We’ll  cross that bridge when it collapses.

Also, our lives will now be replete with homegrown MAGA-style terrorism or, at the very least, a radical background noise. Talibaner Park Boys? Hey, Proud Boys, how about instead of blowing something up, just read this important message from your new leader, Zanonon:

“Climb into your bunker, hook the exhaust of your pickup truck to the air vent, hunker down and wait for my next dispatch. It will be beamed directly into your skulls via a cosmic array beyond normal bandwith of human… [damn, I don’t think there’s enough psylocibin in Seattle for me to reach the current spewings of that republican congresswoman.]”

Years ago I warned how Trump was only a symptom, not the illness. And despite his ongoing postmortem relevance, Trump is not returning to power in March. I realize this is falling on republican ears, but our friend Q is still batting a thousand, well, if a no-hitter is a good statistic for the batter.

Removing Trump is progress but the cancer remains. As for this already hamstrung liberal supermajority, we need to push shit through with lightning speed, or, more accurately, The Flash on a Jolt Cola-bender fast. We need to swiftly pass a mega AOC-esque progressive agenda (MAPA). I’ve already started making the hats, but they’re a little bulky.

Yes, even with a supermajority this push leftward is going to be an uphill slog. Biden has exactly 18-months to push through an expansive progressive agenda, from healthcare, to infrastructure, to a green new deal including a carbon tax and—dare I say it—an end to both gerrymandering and our electoral college itself. This would effectively stunt the rightwing’s minority reign of terror for the foreseeable future.

We will still be a slave to the R side of the senate as well as our new SCOTUS fuckers. Mark.My.Word. And, remember, I birther’d this ticket to defeat Trump, but I never said it was the best equipped to deal with our unusually relevant senate minority leader. Biden will be busy cleaning up the mess until well beyond the midterms. Has this always been their strategy? It keeps working, even if most of us aren’t.

And, come 2022, enough voters will invariably blame Biden for the pending Trump correction. Our ongoing pandemic woes and the economic disturbance will remain fairly catastrophic for the foreseeable future, so enough voters will blame Biden whether that happens tomorrow or next year, because the rightwing media discovered, long ago, their viewer’s attention span couldn’t reach from North Lilliput to South Dwarftown.

Dems are already squabbling over the filibuster and the long arduous who is actually in charge of the Senate deliberations are only in their infancy. And there’s another more basic problem, liberals don’t generally agree on stuff. Liberals represent multiple parties under one tent, some good, some bad, some Antifa. We are not asleep, which is sad because there seems to be strength in slumbers. But we don’t receive a talking point beamed directly into our cerebral cortex from Sinclair Radio.

So amidst this moment of triumph, republicans will still find a way to F everything up?

Yes. When I predicted we would never fully recover from the next post-Dubya, R president that’s what I meant. Do I have some sympathy for Joe’s folksy struggles? Yes. I’ve been watching this affable blowhard operate since 9/11. Heck, I too spent most of my days lost in the pragmatic, moderate, incrementalist-side of the blogesphere. There’s no place for that today, perhaps there never was. Had we all been more left-leaning sooner, we wouldn’t be staring at the end of our collective relevance.

Dems need some killer instincts and my initial insertion of Kamala into the mix was for that very reason. Playing by the rules and trying to unite us has never gotten liberals anywhere. Joe needs to listen to his teammate on this one. She is a savvy prosecutor who could eat McConnell’s lunch, well, if Joe decides to unleash her. He already muzzled her for the VP debate and I sincerely hope that was the first and last time. Unleash the Kamala!

Oh, and do you have any idea the uphill foreign policy shitshow Joe was handed? Of course you don’t. It’s bad. It was easy for Trump when you’re not trying to stop our enemies from gaining the upper hand. How do we remain a relevant superpower now? Our relevance was greatly diminished under Trump, but that’s for another article. For now, here’s a related Informed Comment.

Again, we don’t get those crucial years back, aka the time when republicans were supposedly “leading us” with an approach akin to ideologically jerking off. We are 25-trillion in debt, China is looming, the climate crisis is happening faster than anyone predicted, and Joe’s been handed more problems than Bill and Barack combined …GO!

Feign unity for the midterms and beyond, Joe, but put down the laurel leaf, sharpen your Kamala, and let’s use her to go hunting. Amidst this mass extinction I would like to add a certain political elephant. And be quick about it, time is a wasting.