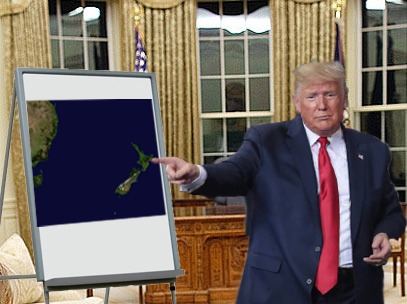 Tweet Tower—President Trump pulled out the old Sharpie and the whiteboard today in an attempt to quell public concerns regarding the fires currently raging in Australia. “There’s nothing to worry about as you can see here from this map,” said Trump. The president then pointed to where he believes the fires are currently located, Christchurch, New Zealand. Using a circular motion he then emphasized all of the water that exists between ‘Australia’ and the United States. Melania weighed in with some advice on how she has managed to quell her own ‘fires down under’ by offering some good referrals to a number of qualified and discrete physicians.

Mrs. Magaluso’s 4th grade class has lodged a formal complaint with POTUS, and his “butchery of all things geographic.” The president condemned the criticism and the school from which it originated. The president has since purchased the land where the school sits and plans to open a resort and golf course. Trump has given the children 72-hours to vacate the premises or he intends to start bombing cultural sites, starting with the medal and awards display next to the gym.

AOC was also critical of the president’s performance today, more specifically for his decision “to always choose a whiteboard,” which she feels is racist and somehow sexist.