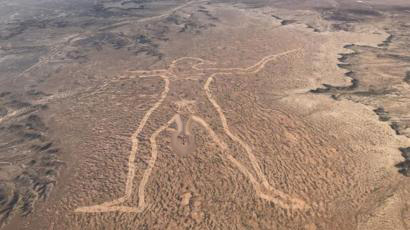 Earth—After some less than savory images appeared in the Australian desert in 2019, the moon has lodged a formal complaint with the Interstellar Decency Authority (IDA). In an exclusive interview with The Discord, the Moon said, “Look, all of the man’s down unders are exposed outback, right there in the down under. Get some ground cover on that shit, maybe a nice desert vine or some climbing fig. Whereas I, the moon, keep offering Earth views of the Sea of Serenity, the Sea of Tranquility, and the like, you people treat me once a month to some full frontal nudity. Oh, but I do like that big spider over at Nazca. More like that!”

[‘Didn’t Australia start as a penal colony?’ joke covered by the editor with a patch of climbing fig.]

Senator Lindsey Graham (R-SC) said, “The Moon has no place to talk, literally, it doesn’t have an orifice for that. Besides, that thing has been mooning the real planet in this system for the last four and a half billion years. Oh, and due to your surface-crater issues I’ve taken the liberty of having Space Bezos drone you a package of Proactiv. Happy New Year, pimple puss.”

Trump tweeted, “My Space Force will take care of this! We will photon torpedo your home planet, IDA!! Not cool!! And Moon, you think you have a crater problem now, JUST WAIT!! #Fire&Photons.”

Taking on the role of jury and executioner, the Sun has recently ordered a series of solar strikes for the purpose of “cleansing Australia.” Many critics of the aggression believe “it will not impact the offensive image whatsoever.”

*I hope the Trump’s Space Force is ready for first contact while he’s still commander in chief. That’ll go smooth.