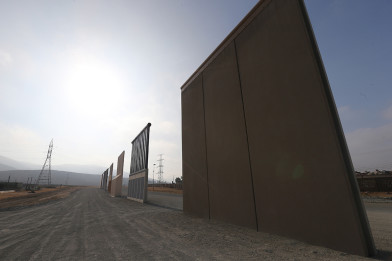 North of the Border—The White House believes it has reached a suitable comprise after being thwarted by a series of court rulings that block both funding for the wall, as well as the use of the military to build the structure. President Trump intends to erect a thousand mile, unscalable partial wall (UPW), an intermittent expanse stretching from San Diego California to a terminus point the president describes as “somewhere in Colorado.”

In a presidential tweet today, the president said, “You can not get over this wall. Where there is a wall, which is still a lot of wall, it’s unscalable. And it’s a good wall, the best wall. I would like to get the Walmart people involved with the rest of the wall, because they are wall people. They even have a pharmacy, in case people get sick of my wall #MissionAccomplished.”

The president went on to say, “We intend to put the rest of the wall in place after I have full control of the judic- the judiciar …my judges. I already have Judge Janine, Judge Judy and Judge Wopner. Did you know the Wopner is not made with real meat anymore? Yeah, I’m not going to allow that. I have ordered the Burger King to stop that shit, immediately. He may be a king, but he’s not the king.”

In related news, McDonald’s CEO Ousted After In-N-Out Bugger With Other Chik-fil-A