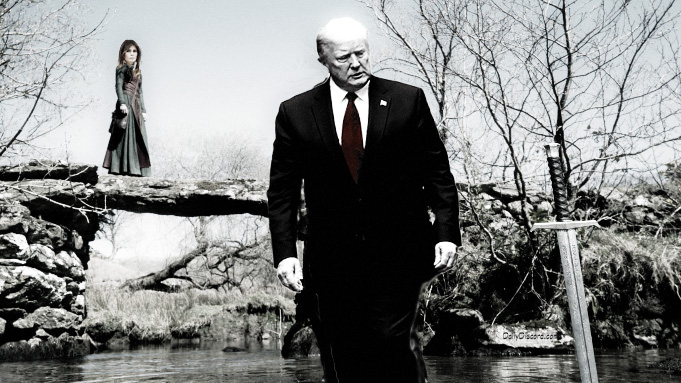 It’s not hard to find a soft spot in your heart for minorities, women, the poor, our LBGTQ population, even our safe-spacing snowflakes, but it’s becoming impossible to stomach the actions and deeds of our rightwing friends, isn’t it? How long can the Republican elite continue to defend Trump’s shenanigans? We have caught glimpses of those mysterious conservative moments of accountability; those times when enough politicians clearly condemn a policy, tweet, or action, but these are rare. Hell, we know more about the ocean floor than we do of the depths to which an average Republican is willing to sink. Where is James Cameron and his Deepsea Challenger when you need him? Mr. Cameron is reaching depths of 2,000 feet and he’s slipping beneath the thermal layer where all the sea creatures use bioluminescence to let each other know where the BBQs are. Then he reaches the rather obnoxious Netanyahu layer before catching his first glimpse of the Ayatollah level, currently under sanctions. He’s now at the soul crushing Jihadist depths where a group of fish are attacking a Starkist cartoonist for his depiction of their tuna god. Another few minutes into the voyage, Mr. Cameron shouts, “I can see it! I can see the top of Trump’s head, and it’s a comb over! Repeat, for God and country, it’s a comb over!!”

There’s a slew of recent articles claiming Republicans are “heading for a cliff” due to either Trump’s ongoing racism, or his gross incompetence, or his No Affordable Healthcare for Humanity program (NAHH!). This view is wrong. There’s no ‘cliff’ when you’re already thriving at the bottom of the deepest trenches. They like it down there. The water’s just fine. And if the massive pressure crushes their skulls it can’t hurt their performance. Remember, with GOP types thought has nothing to do with it. With them it’s all impulse and instinct. Today’s Republicans are the parasite of parasites, the creatures attached to the asses of the organisms attached to the asses of lampreys. Whereas Trump won the election through lies, Hillary Clinton lost, at least in part, for speaking an inconvenient truth, aka her ‘deplorable’ comment. Whether they wear that name proudly on a t-shirt at a Trump rally or not, they do represent the less desirable aspects of humanity.

[Lip service on a pig joke emptied into the trough.]

If we’re deciding to go with a more monarchy-like system, why this guy? People keep claiming our checks and balances are holding, which is more wishful thinking. Trump is running amok. Granted, this is a difficult path for those handful of right-wingers contemplating upholding the most basic decency standards. The Trump effect is daunting. On one side they have their tyrant king who will publicly/nationally shame them for the slightest perceived disagreement/criticism, and then they have their Trump-base constituents, who will invariably side with the president and punish them in the primaries. Facts.Be.Damned.

“Kim Darroch, didn’t break new ground in assessing the president and his administration. Trump, he wrote, is dim-witted (“you need to make your points simple, even blunt”), susceptible to flattery (“you need to start praising him for something that he’s done recently”), lies constantly, potentially compromised by Russia (“the worst cannot be ruled out”), and generally incompetent (“we don’t really believe this administration is going to become substantially more normal; less dysfunctional; less unpredictable; less faction riven; less diplomatically clumsy and inept”).”

We should all be able to agree on this point *cough* with the UK’s ambassador. The Republicans have elected an imbecile to the highest office in the land. And yet they will maintain their belief that the worst Republican is still better than the best Democrat when, of course, the reverse is actually true.

The Intelligencer’s interview with author Adam Gopnik made me realize that I have always been an incrementalist, whether we’re talking about healthcare, green energies, education, immigration reform, or even raising the minimum wage. I understand how major change is disruptive and often counterproductive. This is precisely why some of Bernie and Warren’s ideas frighten me. According to Gopnik our liberal pragmatists, like Clinton and Obama, were always trying to get the “big boat moving” in the right direction. As for the ACA, I always felt it was a solid stepping stone to bigger and broader things. Gopnik agrees:

But the bigger problem has always been that Republicans are simply obstructionists. Moving at any speed in any forward direction is not desirable for the deplorable. Whereas I favor steps at an absorbable speed, Republicans remain either outright obstructionists, or on occasion they will agree to incremental steps in the wrong direction (see: rollback in Wall Street and EPA regs). Essentially the Republican plan has always been pretty simple:

Step 1: Stop any sensible progress on anything at all cost.

Step 2. When society is desperate and forced to make more sweeping changes due to the Republican created emergency and it fails, just say “I told you so.”

Good work if you can get it. Today’s right-wingers are actually rooting against green energies and universal healthcare. Have you spoken to any of these people? The puppet masters have convinced them that dirty water is the sweet sulfury taste of freedom. It’s uncanny how gullible these people are.

Last week I saw Trump deny he even knew what WikiLeaks was immediately followed by the video of his statement that he, “Loves WikiLeaks.” Is this like your prostitutes, sir, you love them all, but you can’t quite remember their names?

Someone has really convinced the Trumpeteers that everything of actual value to their lives is the devil’s work, or worse Marxist. There’s a clarity on the right and a simple tenacity that I fear will never exist on the left. This is the reason they win. It reminds of a Bertrand Russell quote I saw recently:

“The whole problem with the world is that fools and fanatics are always so certain of themselves, and wiser people so full of doubts.”

This sums shit up over my blogging career.

You seem pretty sure of yourself these days, Zano.

It’s true. Following today’s politics has shifted me into an angry, fanatical Zan-zealot. This trend, however, is not driven by my own certainty, but rather my increasing certainty that Republicans will be proven wrong. It’s like deciphering an ancient hieroglyph, cracking their code, or spray-painting ‘Republicans Are Dumb’ on the side of the Luxor. It was the gin fizz special that night, really.

[Retraction: it was during the day.]

A decade or more ago I was fixated on Fox’s grossly dishonest coverage. Fast forward to today and it’s a given that Fox & Friends are lying to their viewers. I have to admit that a rally chant to send four American congresswomen “back to where they came from” would be a difficult even for Fox to ignore. So I hit their website today and the only mention of this astounding low point in American politics was two videos, the first: Trump Takes On “The Squad’ of Progressive Congresswoman At Rally. Hmm. Takes on. How? By deporting them? Detaining them in cages? Grabbing them by the pussy? And the other video entitled: Trump Uses Humor, Strong Language In Memorable Campaign Rally. Really? It’s not a lie, but it was only memorable? How so? Do tell. And I’m sure the humor was the envy of late-night television.

I want to state for the record that whatever Republicans stand for, I am against. In fact, if I owned some guns …uh., what’s that Biblical line? And they shall beat their swords to clip nose hairs? Something like that. I’m Italian …so, sure.

Assuming our country/planet survives a Republican monarch, we will eventually have all the things my fellow liberals have championed over the years. These programs will work and they will be wildly popular (see: every other country across the free west). This will trigger some to beg the questions: Why did it take so fucking long here? Why did so many people needlessly suffer? I’m here to remind people of the answers to those questions: you see, there was once a faction of political miscreants called Republicans. Long ago the fields and valleys thundered with their presence (yeah, not many shopped at Whole Foods or Sprouts), but recently the surviving ones formed a new political party, and, yeah, it’s still pretty stupid.