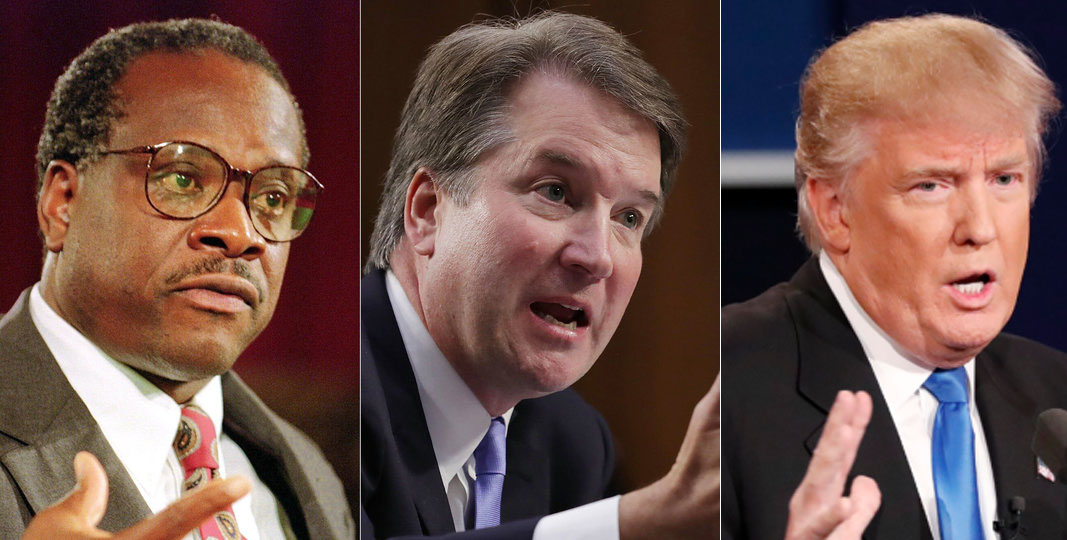 The whole Kavanaugh debacle is a low point in U.S. politics, but, at this point, let’s acclimate. Sure it’s tough to watch our country’s principles, influence, and relevance wane amidst the lowlights from more of our lowlifes. But make no mistake, this post-truth world will give way to a post-American one. My prediction stands: during Trump’s first term we will have a constitutional crisis, an unnecessary war, and/or an economic collapse (2 out of 3 was the original gambit). A Trump second term will represent the proverbial ‘hat trick’, which would be great were this a hockey game. I can see it now, the ice littered with red hats, thousands of angry uneducated screaming fans, and the ‘beer bottles of freedom’ being hurled at the poor schmuck driving the Zamboni. I can relate to that poor schmuck on the Zamboni. Sorry you missed all this, Poke, while you were too busy earning your doctorate in comparative Benghazi studies.

Brett Kavanaugh will further disenfranchise the already disenfranchised and end any pretense of an impartial court. The right has a political stranglehold on decision-making and may still post the midterms. The only thing stronger than Republican stupidity is liberal apathy.

Liberals… forever protesting in October, yet MIA in November.

The political reactions on both sides of the aisle are rather extreme, and *Reminder Alert* this is just the beginning. But, since I predicted all this, it’s hard to apologize for any of it. If the liberal side of the Kavanaugh show ultimately squelches progressive voter turnout, than it was a FAIL. Lib and learn? It’s still crappy to blame us for trying and failing to employ these shadier, Republican-spawned-political-tactics (SRSPT). Don’t worry, we’ll get better at it. I mean the cheating part …the acronym jokes will always suck.

In my friend’s last post he implores me to listen to Ford’s testimony again. He’s employing the old Republican tactic ‘let’s ignore the problem, because of that one over-the-top comment’, or: 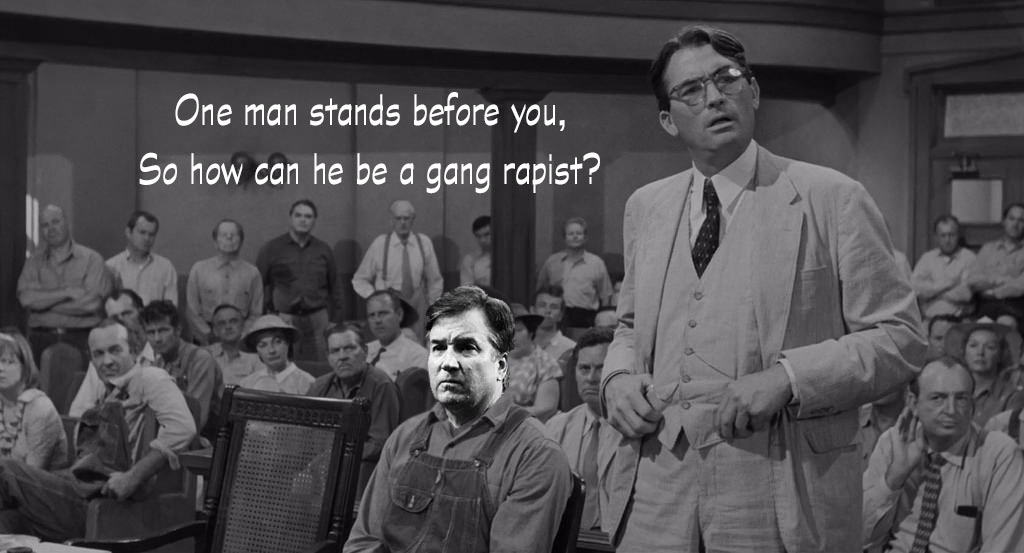 You would never be hired under these circumstances, nor would any of us. I don’t know what happened in that room 35 years ago, but I do know what happened in the Oval Office over the course of my adult lifetime. And gang rapist fits the bills. By their very nature, all Republicans are gang rapists. They are raping our 401Ks, our constitutional rights, our healthcare and our environment, and they’re robbing our collective future. If only our reality could be reduced to some high school horseplay. This is Pokey’s logic:

Someone in the cacophony called Kavanaugh a gang rapist = nothing happened.

Today I stand against liberal fascism in all its forms, but Republicans abdicated the higher moral ground long ago. If you support fascists, you don’t get to say “I’m against fascism.” Next post will be a review of Albright’s book on the subject (with more ‘splainin). Your ‘City on the Hill’ looks great from a distance, but it’s probably time to do something about the drainage. Today’s conservatives make Machiavelli seem a little too cutthroat, but ‘Torturing for Jesus’ does make for a great bumpersticker, doesn’t it?

Here’s the Atlantic’s Tom Nichols signing off from The GOP:

“[Collins’] speech on the nomination of Brett Kavanaugh convinced me that the Republican Party now exists for one reason, and one reason only: for the exercise of raw political power, and not even for ends I would otherwise applaud or even support.”

“We Need to Destroy the Republican Party: A Conservative Luminary Calls for a Clean Start. In which Max Boot says the GOP is racist, the Iraq War was wrong, and Trumpism is a cancer.”

Here’s Boot’s parting suggestion as he gives his party the Boot:

“Only if the GOP as currently constituted is burned to the ground will there be any chance to build a reasonable center-right political party out of the ashes.”

He’s channeling some Zano, for sure, but there’s still some inconsistencies. First off, there are no more Republican luminaries left and, second, the GOP has no incentive to reform. They will forever be rewarded for their greed and ignorance right up until the final collapse. While the GOP should be in its death throes, instead we find reason itself on the chopping block.

My blogvesary asserts: since the Republican platforms starts off from the principled position that “‘life begins at erection’, therefore Adolf Hitler.” Makes sense. Republicanism is a cancer and should be excised as such. Today I am in favor of employing the scalpel, not the sledge hammer, but I doubt you will receive such niceties post the next disaster. Your entire political party is a delicate combination of anti-intellectualism with a dash of misguided romantic fundamentalism.

“The best part of your political party trickled down Reagan’s economy.”

—Me (at some point in the past)

Philosopher Ken Wilber and others suggest, from a consciousness perspective, modern conservatism functions at the level of capitalism/entrepreneurialism and Christian fundamentalism. President Trump, as a pathologically lying, shady, grifter, represents the worst aspects of capitalism. Vice President Mike Pence, a bigoted fundamentalist with Old Testament sensibilities, represents the shittier aspects of religiosity. You are fast approaching the basement of your ideological shortcomings, my friend. Meanwhile, Obama and Clinton (either) do not represent the worst aspects of liberalism, in fact, 44 embraced some of the best.

You keep trying to pigeonhole me as the radical, but at least for today progressives still back the pragmatists. So the ticket won’t be Snowflake & ANTIFA 2020, but there is a Trump & Pence already in office …right now. And I live in fear of what the idiocy of your ilk will bring next. Reminds of Shakespeare, “Something gastric, this way Tums.”

Here’s a great summary of our 2018 political scheissgeist:

“There is little sign that the Republican Party is capable of fundamentally reforming itself. Its plutocratic donor class has a firm grip on its fiscal agenda, while its nationalist (and increasingly authoritarian) primary electorate has veto power over its racial politics. Further, the structure of the American government all but ensures that the party of revanchist, rural whites will retain a significant base of regional support, even if its brand of politics ceases to be competitive in national elections (as current demographic trends suggest that it will) — a fact that will further hinder the party’s capacity for ideological adaptation.”

Let’s play this out to it’s dramatic collusion. I won’t answer your question, Pokey, because I never called Kavanaugh a gang rapist (that will come out during the impeachment hearings), but you have never answered this question: why are you supporting a president that history will define as an authoritarian, pathological liar? While I continue to resist the ongoing assaults to our democracy, why do you remain complicit?

My friend warns of a day when the worst elements of liberalism seize power, while ignoring the whole the-worst-aspect-of-conservatism-already-has. Until you can distinguish between “someone at the lib protest today is a fascist” from “I elect fascists into office for fun” we are quickly running out of things to talk about. False equivalency is working, but it’s no less false. Again, you’re missing the pattern, misidentifying the risks, and giving a free pass to evil. Your party will continue to blow shit up, whether our economy, our checks and balances, or some other country with Groundhog Day repetitiveness. If you haven’t noticed that’s all your side ever does *cough*. Oh, that’s right, you haven’t.

*This post was originally called ‘White Abuse Matters’ …thanks Clarence.