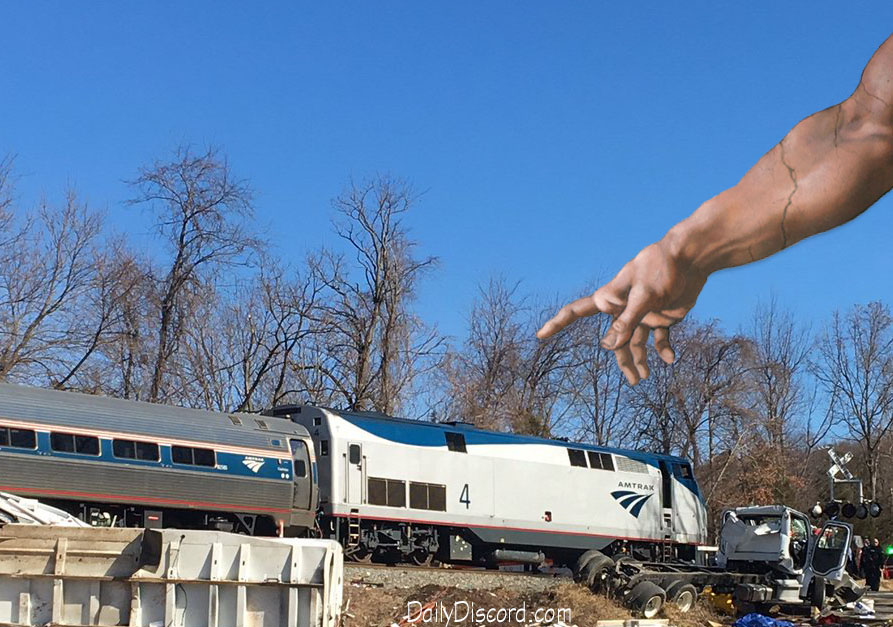 Crozet, VA—God has claimed responsibility for the derailment of a train carrying a number of Republican congressman outside of the small town of Crozet, Virginia earlier today. God stated that the attack was a response to last night’s State of the Union address. His or Her Holiness told the U.S. press today, “Do not follow this false prophet! Trump talked for friggin’-ever last night and then the Democrats got their turn to respond after his speech, so what about me? Why can’t the Supreme Being get a word in edgewise? Well, I’m done with this shit. Trump does not speak for me, hell, without a teleprompter that ass-clown can’t speak at all!”

Liberals and other like-minded groups across the globe are hailing the act as “really terrible, yet appropriate” and are hoping this message will be perceived by evangelical Republicans as a “wake-up call”.  Critics, however, are calling the event an act of terrorism. Senator Lindsey Graham (R-SC) said, “Let’s call this what it is, an act of divine terrorism. God needs to be added to the no-fly list and the NSA should be monitoring all of his modes of communication, including bedtime prayers.”

The president is reportedly furious over the incident and the White House released an official statement calling God, “Out of touch with the American people”, and “a dick”.

The Department Of Justice has asked, “What did Jesus know, and when did he know it?” Jesus responded almost immediately by saying, “We are omnipotent, so that’s a really dumb question even by Republican standards. Oh, and we’re sort of the same entity, but don’t rope me in with this crap. It’s always been a ‘good cop, bad cop’ sort of thing.”