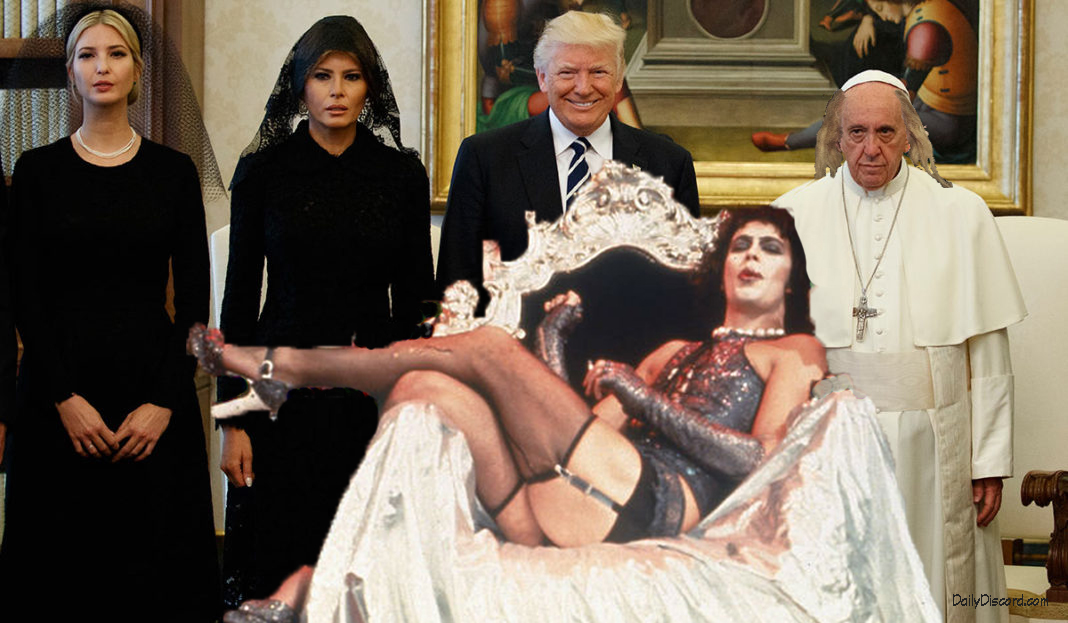 What exactly is Trump Derangement Syndrome? Offhand the words ‘Trump’ and ‘Derangement’ seem like a harmonious linguistic pairing, but the addition of the word ‘syndrome’ implies those concerned about Trump’s derangement are themselves deranged. Many theories are abound and, as usual, you can click and drag the republican version of events over to the nearest receptacle icon. Ctrl-Alt-Elite? As a blogger who predicted disaster at this historical juncture, I have a theory of my own. In 2017 if you are comfortable with the state of our union, you are the problem. See? That wasn’t so hard. You can call me the father of TDS as I planned to lose my shit no matter who on the right got the presidential nod. I’ve been organizing this whole Resist-type effort for well over a decade, and I expect to see all 11 members of the Zano Nation at my rally next Friday over at Hops on Birch. BYOB. You will have to smuggle it in as Hops is a bar.

The Grand Old Party is spending all of its time these days dismissing the left’s outrage as totally meritless.

Here’s a Hannity quote on the left’s “over reaction” to the firing of FBI Director James Comey:

“There is no getting through to these Alt-Left, radical kooks. They’re detached from reality and they suffer from Trump derangement syndrome.”

—Sean Hannity, using a variation of my words to describe republicans, but in a different order (See: Alt-Douche).

During all the Hannity’s America segments I could watch this week, without the aid of benzos, the Seanster never mentioned how Comey was scheduled to appear before Congress to discuss Trump’s possible collusion with Russia the following week. To ignore this fact is not simply guilt by omission, it’s an Ubererror of Biblical Disproportions (UBD). Hanniperbole? The timing of Comey’s dismissal is kind of like firing your probation officer right before you’re due for a drug screen …upon your return from Woodstock …with Cheech & Chong.

Lately I’m hearing my own words being thrown back at me. Libs identify a problem on the right and it’s then eventually twisted around and thrown back in our faces as an original idea. So… regurgitating my own thoughts back, years later, is the republican version of critical thinking? Really? Creative linguistic reorganization? Hey, it’s better than when your president attempts it, because that sounds more like word salad.

What’s really getting my goatee this week is how people are misrepresenting my position on this Russian collusion thing. I don’t know if Trump colluded with Russia, no one does except maybe Boris and Natasha. Hell, I don’t know if our president understands the meaning of the word collusion, but…

If you read the above points and think, yeah, an independent counsel is overkill. Jeff forced-to-recuse-himself Sessions can handle this crisis of confidence. Riiiight. If you recall, even I was not against the first Benghazi investigation (operative word first). And if we allow this situation to fester and go unchallenged our nation has taken one giant step toward a banana republic. And when Trump goes gently into that good night, hopefully sooner than later, that asshole Hannity needs to go with him!

Back to name calling, Zano?!

No! You misunderstand. Check out the new Merriam Webster definition of asshole:

2. Someone who insists on endless investigations into an embassy attack in Benghazi, despite finding no wrong doing, while refusing to allow one independent review of a U.S. election wherein Russian interference is known to have occurred and the possible collusion of a U.S. president and/or his appointees remains in question.

Sentence: Sean Hannity is both an anchor at Fox News and an asshole.

Wow. Way to go Merriam Webster! It’s amazing how they did that in one long, run on sentence (on a related note, please move back to Flagstaff, Jamie B.)

One Washington Examiner thinks she’s figured out the origins of Trump Derangement Syndrome:

“All those sophisticated anti-Trump voters with college or advanced degrees likely first learned to hate those with whom they disagree on the very university campuses that have failed to teach critical thinking and intellectual tolerance.”

My personal political journey started after our botched reaction to 9/11 and my revulsion toward republicans started because of everything they have done or tried since. Republicans have proven to be wildly incompetent. They seem unable to even identify our country’s problems, let alone solve any of them. In fact, having a republican lecture me about critical thinking is kind of like having a Klingon give me interior design advice. It’s absurd.

My clarion call has been the premature death of critical thinking on the right, but I always predicted the left would follow suit. Why? Because everyone has their breaking point, which was also my favorite Keanu Reeves/Patrick Swayze movie. I have been covering how anger clouds judgment and libs are very very angry. But we didn’t start the fire …never mind the police report.

My origin theory of TDS is simple: those of us with an IQ above a turnip are not going to standby idly and allow our republic to be destroyed by a sociopathic man-child. Nor are we going to support the super moronjority who saw fit to place him there. My intellectual tolerance for rightwing antics ended long ago and, much like the hipster mullet, it’s not coming back. I didn’t learn to hate republican ideas in college, I learned to despise them on their merits, or lack thereof. Heck, I didn’t retain anything in college as most of my professors would attest. The origin of this phenomenon dates back to the GOP’s conscious decision to form an alternate reality and the laundry list of very real consequences that decision has created here and abroad. Regardless of the task, republicans have proven that they’re not the people for the job. In fact, firing them all and dealing with the resulting spike in unemployment statistics would be well worth it.

Retraction: The Keanu Reeves/Patrick Swayze movie was actually Point Break (1991). See? We even do retractions Fox News and we’re just a spoof news site. What’s your excuse? Kidding, there’s no excuse for you.