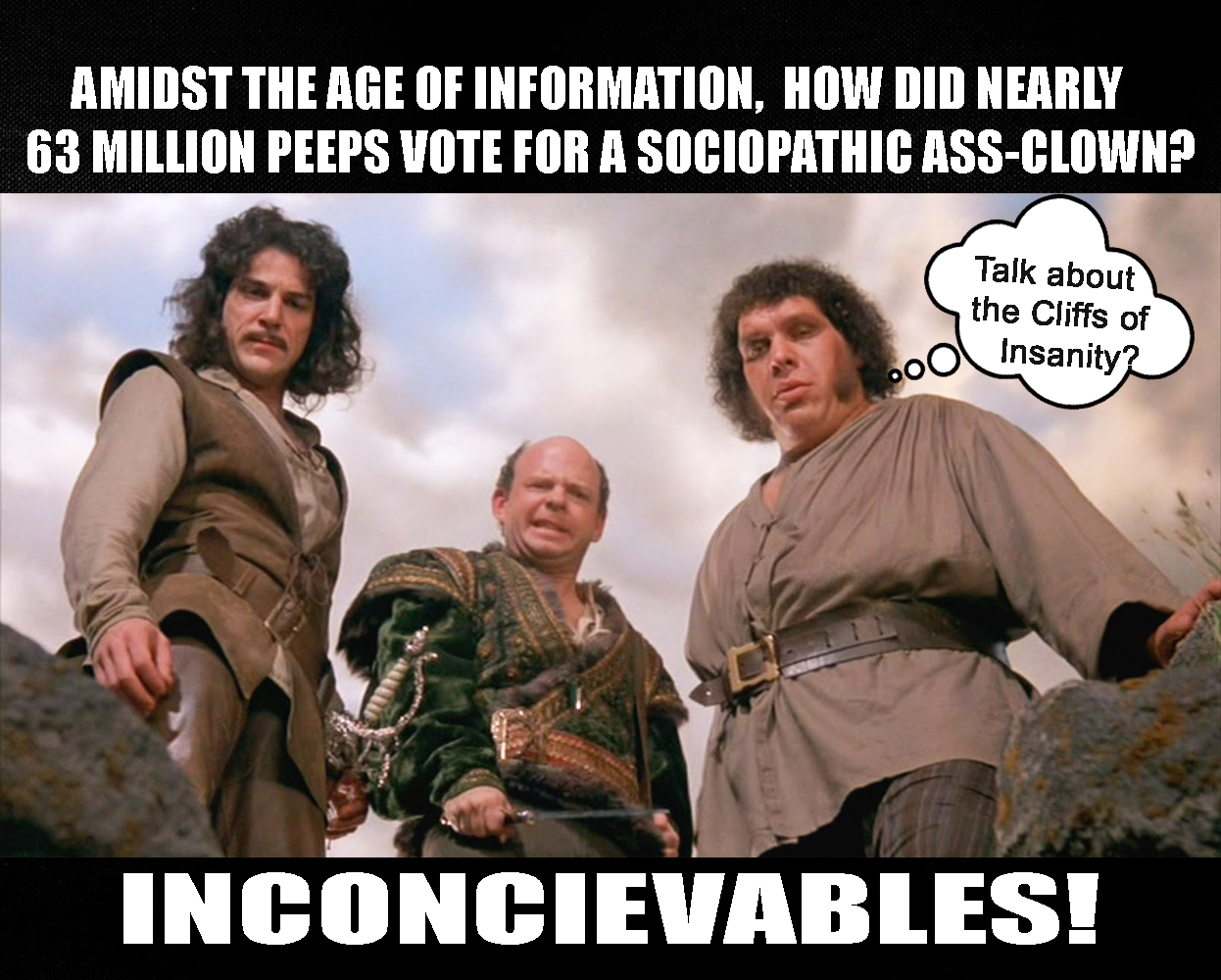 Apparently the term ‘Deplorables’ is not wildly popular amongst those deplorable people among us, so how about the ‘Unreachables’ or the ‘Irredeemables’? Or maybe we should channel some Vizzini and go with the ‘Inconceivables’? Our president enjoys historically bad early approval ratings and he’s flip flopped on almost every major campaign promise, yet only an astounding 2% of Trump supporters show any buyer’s remorse whatsoever. It reminds me of when Dubya left office, still holding a 70% approval rating in Kansas. Bad Economies Matter? Today our economic growth is slowing, our healthcare system is exploding, and WWIII is looming large (all way ahead of Trump’s golf schedule). Keep your guns, peeps, but you may not be able to afford the bullets soon. Silencer of the Lames?

Why the Unreachables, Zano?

You helped elect the second most dim-witted president in our nation’s history, twice, and if we make it to 2020—which is a big fucking “if”—the vast majority of you would gleefully repeat the mistake with the single most dim-witted leader. This isn’t a game. If it were you’d be losing, which, incidentally, is the same as Trump’s winning.

In light of recent events, I have deemed discourse with Republicans DOV (Dead On Verbalization).  We have all joined our respective FaceBook groups. Recently I joined such prestigious forums as FU Trump and Donald Trump Clown University. Proud member since last week. Hate Threads Matter? Sure the implications are horrible, but not as horrible as participating in a political conversation with the aforementioned Unreachables. I have been warning about this shit since our botched response to 9/11, so the words ‘tough shit’ come to mind.

You didn’t think there’d be a cost for creating an alternate political reality, one wherein wrong is the new right and dumb is the new smart? How you managed to take a political party with no relative worth and manifested a super majority is a true testament to our country’s failing educational system.

“Sorry republicans, but if you don’t want to be called stupid, meet me halfway, and stop being stupid.”
—Bill Maher

Amidst Diane Rehm’s recent NPR departure, she implored people to “keep talking to each other.” About what? Have you spoken to a Republican in the 21st century? If you don’t believe we need an EPA, as our oceans die and our ecosystems crumble, then there’s nothing left to talk about. Clean water and clean air are prerequisites to human discourse. Funny, but binge-watching Duck Dynasty is apparently not. Will this overt breakdown in communication widen the rift between us? Sure. Does it matter at this point? I don’t believe so.

Even the NYTs—presumably in an attempt to remain impartial—just hired WSJ climate denialist Brett Stephens. Why bother? There’s nothing on the other side of the political spectrum but wasteland. You can’t meet someone halfway if they’re driving in the wrong direction. During the bubonic plague did the Europeans of the time attempt to negotiate with the rats? Black Death Matters? The right side of the political equation has nothing to offer society and even the coming Trumpocalypse will not change that fact. Everyone, and I mean everyone in the world of journalism seems to think the GOP will pay a heavy price for repealing Obamacare. When has the GOP ever paid a price for their misdeeds? The Unreachables will remain unreachable in 2018 and beyond. Those stripped of their healthcare or impoverished by Republican policies will still vote for their team. Why? They bring their own facts, their own data, their own spin to any eventuality.

“Damn it, Betty, there was still one Obama death panel hiding in my TrumpCare!”

Right now, conservatives remain transfixed on how colleges are handling their speaking engagements, while ignoring our president’s overt attempts to dismantle the First Amendment and erase the separation of church and state. They blame liberal smugness for all the world’s ills. They would like us to believe, had libs only been nicer, Hillary would be president today. Riiiiight. Maybe Obama should have just been nicer to Mitch McConnell and he wouldn’t have abandoned his main priority “to make sure Obama’s a one term president.”

Yes, amidst the onset of the Great Recession, Republicans be like:

Let’s F shit up and then not help during the recovery efforts. Screw Detroit.

So a nicely penned ‘Thinking of You’ card from Obama would have changed the saboteurs’ agenda and Merrick Garland would be sitting on the Supreme Court today? Healthcare would be stabilized and they’d reach across the aisle to do what’s best for America?

That’s a bit of a reach.

If you don’t understand how you’re nothing but a pack of obstructionists, again, what’s left to talk about?

Hint of the Day: There is not a smidge of an inkling of an underpinning of evidence that the GOP is growing more rational, competent, or compromising.

Meanwhile, no matter how loud, rude, or wrong Republicans become, libs must always show proper Demiquette. The double standard, like CO2 in our atmosphere, is reaching new levels. This week Stephen Colbert refused to apologize for his recent Trump diatribe. No more apologies! TrumpCare just passed the House with a whopping 17% approval rating. When is the GOP’s approval rating going to start to match its deeds? Here’s a NYT’s piece, essentially agreeing with my unreachable premise. The article focuses on hard data vs soft data. All the soft data looks good for Trump at the moment, you know, the imaginary Trump-bump perception crapola (what I call Foxal Matter). Hard data died long ago and it’s not coming back, but luckily for them their soft data factories are working around the clock to compensate.

You are robbing us of our collective future and you haven’t even bothered to notice.

The name calling argument has personal implications for me. An old Dalai Lama adage comes to mind: if you have the choice to be correct or kind, be kind. Squatting on a lotus and watching the west burn has proven difficult for me. Granted, it’s always preferable to show how someone is wrong over a slew of descriptive adjectives, but it’s becoming increasingly hard to maintain any level of civility at the edge of another GOP-delivered catastrophe.

However, once one casts judgment on an entire faction of our population, it forever clouds objectivity.

“If an experience is contaminated by the past it is merely a continuity of the past, and therefore not an original experience.”
—Krishnamurti

As we shift into our respective camps, political debates on both sides of the aisle will continue to drop even more IQ points. Hell, it’s part of the reason Republicans have been so wildly successful at being unsuccessful. Turn off the reasoning center of your brain, kick back, and watch the magic unfold. Following their reckless tactics is fraught with dangers, but c’est la vie. No really, say it—it’s French, which will piss them off even more, especially today as sanity prevailed in the form of a Macron victory.

Sorry folks, but if you plan to screw up my country and my planet, all seven of George Carlin’s words you can’t say on tv come to mind. The age of tolerance has ended. I have used the F-word more since November than in my entire blogging career. Holding the higher ground has availed us nothing. Is every Republican irredeemable? Of course not, but does it matter at this point? As I stare off the Cliffs of Insanity, I don’t believe so. Name calling is the least common denominator, but so is the election of a sociopathic man-child. To have any kind of a future this country must break its ongoing “veneration of ignorance.” At some point we need to realize that if it walks like a Duck Dynasty and it quacks like a Duck Dynasty, it’s an Ass-Clown.